Why is it Better to be Middle Class Than Upper Class?

Income inequality is not the real problem

A recent article from National Public Radio reporting on a new Pew study says America has reached a tipping point because less than half the country belongs to the middle class. The first few paragraphs of the article makes things sound pretty bad. The story quotes Pew researchers: "The hollowing of the middle has proceeded steadily for the past four decades.”

Later in the article, though, readers discover an important point: The hollowing of the middle class is due more to people joining the upper-income category than falling back into the lower-income one.

This jibes with research from a University of Michigan-Flint professor and member of the Mackinac Center’s board of scholars, Dr. Mark Perry. In an article published earlier this year, Perry noted that since 1970, the percentage of American households in the middle class (those with annual incomes between $35,000 and $100,000) has declined from 53 percent of the population to 43 percent. And the percentage of poor households in the population declined from about 39 percent to 34 percent.

Where did they go? To the upper-income category, which increased from 8 percent of the population to 23 percent. Here is his chart summing up the changes: 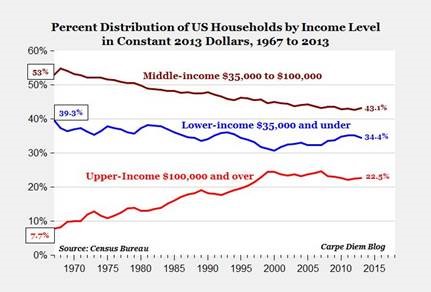 The NPR article and Pew report acknowledge that inflation-adjusted household incomes have risen for all income levels.

So what’s the problem, exactly, with a declining proportion of middle-class incomes? According to the NPR story, since 1970, incomes for upper-class households has grown more (47 percent) than for those in the middle- (34 percent) or lower-income categories (28 percent). In other words, the problem is growing income inequality.

But just pointing out these changes in income statistics and categories doesn’t really provide guidance on how to actually help people who are struggling economically. Max Borders sums it up this way:

When we hear people fretting about inequality, we should ask ourselves: Are they genuinely concerned for the poor or are they indignant about the rich? Here’s how to tell the difference: Whenever someone grumbles about “the gap,” ask her if she’d be willing for the rich to be even richer if it meant improved conditions for the absolute poorest among us. If she says “no,” they are admitting their concern is really with what the wealthy have, not what the poor lack. If her answer is “yes,” then the so-called gap is irrelevant. You can then go on to talk about a legitimate concern — e.g., how best to improve the conditions of the poor without paying them to be wards of the state. In other words, the meaningful conversation we should be having is about absolute poverty, not relative poverty.

The good news is that all income levels are rising. Inequality in itself is not the real problem.