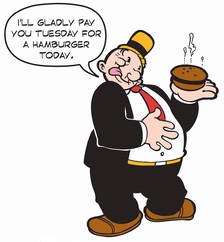 Both the Michigan House and Senate have included a provision in their competing road funding proposals to cut the state income tax in 2019, but only if the amount of revenue deposited in the state general fund increases at a rate faster than inflation.

To be clear, any time its members want, the Michigan Legislature can cut the 4.25 percent state income tax rate with just a simple majority vote and the governor’s signature – no fancy trigger mechanism is required.

The gaping loophole in this tax cut trigger proposal is that “general fund” is not a precisely defined accounting category, but is instead a political construct whose definition is subject to the whims of politicians. A simple legislative majority can easily shift current revenue streams away from the GF and into some other account. They can also game GF deposits — for example, by causing more revenue to flow into the state’s rainy day fund instead.

So while the gas and vehicle registration tax hikes approved by the House and Senate would be very real if enacted, promises of a future income tax cuts are far less concrete, even when they don’t include questionable trigger devices. Worse, the legislative track record gives ample cause for skepticism.

A classic example occurred in 2002, when a 23-year phaseout of the widely reviled Single Business Tax was terminated. The steps taken to avoid accountability made this a particularly unseemly action.

The 1999 law authorizing the SBT phaseout had a provision canceling the next rate reduction if the state rainy day fund fell below $250 million. In 2002, legislators wanted to use rainy day fund savings to avoid spending cuts in the face of stagnant revenues. But doing so would prevent the next scheduled business tax cut, and Republican legislators did not want a vote to do so on their records.

So they advanced two bills: one to make the rainy day fund withdrawal and a second to allow the SBT phaseout to proceed even if the rainy day fund was emptied. Just in case, the first bill had a tie-bar provision, which prohibited it from going into effect unless the second bill allowing the tax cut also became law.

But then, Republican Gov. John Engler announced he would veto that second bill.

And that’s where legislators got sneaky. In a voice vote taken in the House on July 3, 2002, an amendment was adopted that stripped the tie-bar provision from the rainy day bill. The amended bill was then passed by a wide margin.

One fiscally conservative lawmaker asked me at the time, “How can I know with certainty what Engler will do?”

Older readers will recall that Engler had a reputation as the exact opposite of a wishy-washy flip-flopper in such situations.

This so-called temporary suspension of the tax phaseout became permanent as Michigan’s “one-state recession” deepened. In 2007, the SBT metastasized into the equally reviled Michigan Business Tax and was increased 22 percent, part of a big tax hike that also raised the state income tax rate from 3.9 percent to 4.35 percent. This last provision came with another statutory promise to reverse the income tax hike by 2015.

Not until 2011 and a comprehensive tax reform package from Gov. Rick Snyder did businesses finally get relief from the toxic SBT/MBT tax regime. Ironically, the same bill that delivered it also broke another tax cut promise: the one made in 2007 to gradually reverse that year’s big income tax increase. Had that not happened, the income tax rate would now be 3.9 percent instead of 4.25 percent.

The idea of placing future tax cuts in law is to force future politicians to go on record if they want to stop the cut. The details of the 2002 vote to suspend a promised tax cut show the lengths to which politicians will go to avoid accountability for this. Adding contingency clauses to future tax cuts makes it more likely they won’t really happen, by making it easier for future politicians to dodge accountability for blocking them.