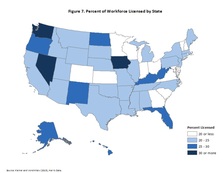 The White House Council of Economic Advisers has released a new report about occupational licensing. It outlines the growth in licensing over the past few decades and argues that this reduces employment, raises prices and lowers wages overall.

The report recommends that states lower or eliminate this barrier to entry by establishing some “best practices.”

There is evidence that licensing requirements raise the price of goods and services, restrict employment opportunities, and make it more difficult for workers to take their skills across state lines. Too often, policymakers do not carefully weigh these costs and benefits when making decisions about whether or how to regulate a profession through licensing. In some cases, alternative forms of occupational regulation, such as State certification, may offer a better balance between consumer protections and flexibility for workers.

By one estimate, licensing restrictions cost millions of jobs nationwide and raise consumer expenses by over one hundred billion dollars. The stakes involved are high, and to help our economy grow to its full potential we need to create a 21st century regulatory system — one that protects public health and welfare while promoting economic growth, innovation, competition, and job creation.

The authors recommend that licensing regimes directly and measurable protect "legitimate public health and safety concerns," use more voluntary certification, minimize fees and lowering regulatory hurdles. It also suggests setting up an independent state commission that would conduct cost-benefit analyses of proposed new rules and reduce the number of "unnecessary and overly-restrictive licenses."

In Michigan, fortunately, Gov. Rick Snyder has said he won’t support any new licensing laws that don’t pass similar standards as those listed in this new study. But there are hundreds of mandates currently on the book that burden workers and consumers in Michigan that legislators or an independent commission should look at.

The Institute for Justice, a public interest law firm which has done studies on licensing, has model legislation that would incorporate the suggestions in this study. The bill would eliminate barriers for potential practicioners while still keeping safeguards in place to protect the public when necessary and cost-effective.