ALICE report puts most past Michigan citizens below ‘survival’ budget 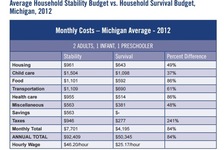 The United Way has released a report that says the vast majority of Michigan residents need a lot more money in order to be financially “stable.” The study has received wide media attention (sample headline: “More than 1.5 million Michigan households struggling”), but the claims paint a distorted picture.

According to the study, “1.54 million households in Michigan – fully 40 percent, and more than double the number previously thought – are struggling to support themselves.” Many of those households live at or below the federal poverty rate, but most of them are above that rate and classified by the United Way as ALICE (Asset Limited, Income Constrained, Employed). The report says, “The core of the problem is that these jobs do not pay enough to afford the basics of housing, child care, food, health care, and transportation.” It measures “a level based on the actual cost of basic household necessities in each county in Michigan.” It adds later, “ALICE households are forced to make difficult choices such as skipping preventative health care, accredited child care, healthy food or car insurance.”

The report says the “Household Survival Budget” for a Michigan family of four is $50,345 and in order to live with “stability” (“one that enables not just survival, but self-sufficiency”) in Michigan, a family of four needs $92,409.

But these figures are not composed of estimates of what families actually need to survive. Instead, they are averages of what people are already spending on child care, transportation, health care, etc. The report assumes that anyone spending less than these average figures must be below the “threshold for economic survival.” Further, it does not attempt to show that citizens can’t live happily and healthily by spending less than these averages — in fact, most Michiganders did just that a short time ago.

For instance, the report says that in order to “survive” at the “bare minimum” a household with two adults, a preschooler and an infant need to spend nearly $600 per month on food and $700 monthly on transportation (among other things). But it is, in fact, possible to live comfortably without having to spend these amounts. (My family of four lives very well and spends significantly less).

The other interesting perspective to consider about this report is that it suggests that economic stability was out of reach for the vast majority of people throughout history. Overall, Americans are getting a much better deal on food, child care, housing, transportation and health care, and devoting a much smaller portion of their income to most of these expenditures than they did in decades past.

Health care spending is the outlier here — it has increased exponentially over the decades. Not coincidentally, that is an area where taxpayers have paid more and more of the costs. But the value of this and the other four areas have increased substantially over the years.

Rising incomes and lower food prices mean the percent of personal income spent on food by Americans has fallen 60 percent since 1940, from 25 percent of family budgets to 10 percent — a steady decline for decades. Americans spent about 42 percent of their income on food in 1900.

According to the U.S. Bureau of Labor Statistics, transportation spending has declined since the 1980s (and today’s vehicles are safer, more reliable and get better gas mileage). Housing has gone from 27 percent of the average household budget in 1950 to 33 percent in the 2000s, but this is mainly because people have chosen to buy larger homes. The average house size has increased more than 1000 square feet since 1973 (with smaller families).

The cost of child care has increased, but only from 6.3 percent of the average household budget in 1984 to 7.2 percent in 2010, according to Pew Research. But there are also more women in the workforce today, so much of extra spending may come from the extra income of employed women.

And for the nonessentials, things like refrigerators, washing machines, stoves, toasters, vacuum cleaners and televisions, they are more affordable than ever. As UM-Flint economics professor and Mackinac Center Scholar Mark Perry reports, it required almost 900 hours of labor to afford these amenities in 1959 — today, it requires less than 200 hours of work.

None of this is to say that there aren’t many people in Michigan who are struggling economically, and legislators should pursue policy options that will help them. The ALICE report doesn’t call for many specific reforms, except for increasing Michigan’s minimum wage even more. Policymakers should instead remove barriers to economic opportunities, such as overbearing licensing laws, overcriminalization, auto insurance mandates and regulatory rules (such as those covering ride-sharing services such as Uber). These policies have a disproportionate effect on low-income families and should be reformed.