Right-to-work laws give workers the choice over whether to financially support the union organized in their workplace. Employees who opt out of belonging to a union, however, still must accept union-negotiated compensation and terms of employment. Similarly, because a union represents all workers, it is obligated to provide services for nonmembers. Labor organizations routinely claim that this makes these nonmember employees “free riders,” arguing that they are getting something for nothing. From a different perspective, nonmember employees are also “forced riders,” obligated to accept the union’s representation whether they want it or not.

States with right-to-work laws can mitigate this issue for their public sector workers and unions. The policy outlined in this paper —“Worker’s Choice” — would release employees from unwanted union representation and relieve unions from providing services to so-called free/forced riders. In addition to this, Worker’s Choice aims to enhance freedom-of-association rights, increase public sector productivity and make government unions more responsive to their dues-paying members. It is also carefully designed to avoid increasing the burden of negotiating with public sector unions.

Worker’s Choice would enable public sector employees who opt out of union membership to represent themselves, and it would relieve unions of the duty to provide these employees with services. Nonmember employees would negotiate for their own compensation and working conditions, which would be separate from the union contract. Therefore, public sector employees in unionized workplaces would choose one of two options:

Worker’s Choice does not require major changes to a state’s public sector bargaining law. In fact, the legislation required to enable this policy is relatively simple (see model legislation in Appendix A). But the impact of Worker’s Choice is significant: It would enhance employee freedom in the workplace and fix the free/forced rider problem that afflicts both public sector unions and workers in right-to-work states. 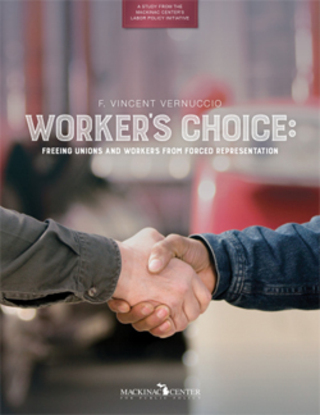