No, the GOP Did Not Win Because of Gerrymandering

House, Senate seats the result of where people choose to live 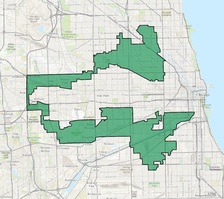 The Illinois 4th congressional district is one of the most gerrymandered in the country.

In his recent Dome Magazine article, Rich Robinson of the Michigan Campaign Finance Network writes that Republicans won the state House and Senate because of “the power of the gerrymander”:

As old Joe Stalin observed, it’s less important who votes than who counts the votes. Or, in our contemporary situation, how the votes are grouped to be counted.

...Through the magic of drawing advantageous district lines, a pure toss-up state has been turned into a locked-down Red State government. I guess you have to take your hat off to the mechanics in the back room that pulled that off. But this rigged election outcome bears no resemblance to democracy. The principle of one person, one vote has been used for toilet paper.

But that does not actually appear to be the case in this most recent election. Gerrymandering certainly had some effect, but a careful look at election results shows that was not the reason the Republicans control the House and Senate.

[H]ere’s the problem with the argument that redistricting gerrymandered Democrats into an impossible task to win the majority. Most of the key House and Senate battles did not take place in these seats. In fact, many of them took place in seats whose boundaries have been largely stable or, in some cases, were made friendlier to Democrats than they were in the 2001 reapportionment plan.

Gorchow points out that Republican “gerrymandering” actually made the toss-up Senate seats more favorable to Democrats – but they still lost them. And regarding the State House, he writes:

[I]n looking at the House, of the four seats Democrats now hold that they lost on Election Day, none – I repeat, none – were designed in a way to tilt the playing field to the GOP. The 62nd District, with Battle Creek and environs, is a seat with a majority Democratic base. Republicans actually made the 71st, lost by Rep. Theresa Abed (D-Grand Ledge), a bit more Democratic when they redrew it, as was the case with the 91st, lost by Rep. Collene Lamonte (D-Montague). The 84th (Huron and Tuscola counties) has had the same boundaries since at least 1992.

So why did the GOP win so big at the legislative level while winning the gubernatorial race by only a few points and losing most “down ticket” statewide elections? Mostly because of where people choose to live.

Voters who tend to prefer Democrats are packed more closely together, often in urban areas. Republicans are spread out, more likely to live in suburban and rural areas. No matter how the lines are drawn in Michigan, Democrats will have the vast majority of the districts where 70 percent or more of voters choose them. There are many more districts that have a 50-60 percent Republican base than districts with strong Democratic support. Therefore, Republicans have better chances to win more districts than Democrats just based on where people choose to live.

That’s the simple math of our current electoral system.