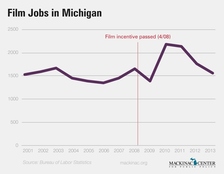 Five years and $500 million later, Michigan has fewer film jobs than it did when the state started its subsidy program.

According to the federal Bureau of Labor Statistics, Michigan had 1,561 film jobs in 2013 (the latest year information is available). In 2008, the state had 1,663 film jobs. See chart nearby.

Michigan currently spends $50 million per year subsidizing film productions. Previously, the program was uncapped – in 2010-11, the state spent $115 million. Overall, as of this year, taxpayers have devoted $494.7 million to the program.

Because film productions are so mobile, among other reasons, the economic analysis of incentive programs is overwhelmingly negative – from researchers on the left and the right.

Batman and Superman vs. Taxpayers

Five Reasons Government Subsidies For Films Are A Bad Idea

Cost of Film Program Could Repair Over 5 million Potholes