2. Only 5 out of 139 Michigan Charter Schools Have Unionized Teachers

Charter schools are government-funded schools that operate with more autonomy and somewhat less regulation than do traditional government schools. They are funded on a per-pupil basis from the state School Aid Fund, which means that the more students they attract, the more state funding they receive. Renewal of charter school contracts is also based on student academic performance. In contrast, traditional government schools could continue to receive some tax money even if every single student left for an alternative school.

"The organizations-the unions and professional associations-to which teachers belong have protected their weakest members rather than winning rewards for their strongest."

Since a charter school's state funding relies solely on the number of students it is able to attract, charter school administrators must carefully weigh the competence of their teachers. Poor teaching will eventually result in fewer parents choosing to send their children to the charter school—or even a revocation of the school's license to operate. As a result, teachers are usually employed on an at-will basis, without the opportunity for tenure. Charter school administrators and teachers alike accept considerable risks when their school's funding is ultimately contingent on parental satisfaction and student performance.

One might assume that charter school teachers are ideal targets for union organizing due to their relative lack of job security compared to their traditional government school counterparts. But this has not proven to be the case. In the 1998-99 school year, only 3.6 percent of Michigan charter schools had union collective bargaining agreements in place. No teachers from schools chartered by public universities (110 out of 139 schools, or 79.1 percent)8 have been organized by a labor union. Table 2 and Chart 2, opposite, show that the vast majority of charter schools remain free of labor union influence. Furthermore, the only unionized charter schools are those chartered by unionized entities.

Teacher and former union representative James Morris echoed the sentiments of many of his charter school colleagues when he wrote to his state assemblyman that, "I have far more rights working in a public charter school that I ever did working & at a traditional school."10

Standard union contracts establish teacher salaries based on years of service plus the number of college credits earned beyond a bachelor's degree. In contrast, non-unionized charter schools tend to calculate salaries according to a more diverse range of factors including teacher expertise, experience, education, student achievement, and other criteria. In addition, charter school teachers are often able, through performance-based incentives, to increase their salaries faster than traditional government school teachers bound by rigid collective bargaining agreements. One Arizona administrator believes that this ensures accountability: "[S]tudents pass the exams, or the teachers don't have jobs! This is all the incentive we need to get and keep the most qualified teachers."11

In spite of charter school teachers' disinclination to seek or accept labor union representation, unions have made limited attempts to organize them. But these teachers continue to reject more than accept the overtures of union officials.12 Part of the reason for their disinterest in unionization may be the different economic incentives present in charter schools. Charter schools must attract and retain students primarily through attracting and retaining high-performing and competent teachers. Collective bargaining agreements almost always prohibit basing teacher pay on performance or other objective and subjective factors that indicate qualification and excellence.

These limitations of collective bargaining agreements are recognized by many as a primary hindrance to schools' ability to attract and retain the most qualified teachers. The Task Force on Federal Elementary and Secondary Education Policy of the 20th Century Fund explained it this way:

The organizations—the unions and professional associations—to which teachers belong have protected their weakest members rather than winning rewards for their strongest.

The collective bargaining process, moreover, has not only made it difficult to encourage promising teachers or dismiss poor ones, it has forced many of the best to leave teaching for more financially rewarding work. The result is that the quality of teaching suffers.13

The often rigid and prohibitive work rules established in the standard collective bargaining agreements of traditional government schools may end up driving many teachers into charter schools. To high-performing teachers, the freedom to innovate and the potential for greater financial rewards in charter schools could outweigh the job security and schedule-based salaries included in union-negotiated contracts.

The labor unions' demonstrated failure to organize and influence Michigan's charter school teachers provides a clue to understanding union opposition to lifting the legislatively imposed cap on the number of charter schools public universities can authorize. Each time a teacher chooses to leave a traditional government school for a charter school, a labor union loses a dues-paying member. The short-term financial self-interests of unions and the growth of charter schools are thus incompatible with one another. For the sake of their organizational strength and influence, unions have strong incentives to oppose efforts to allow parents more charter alternatives to the traditional government schools. 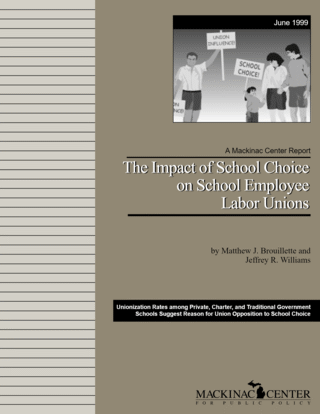