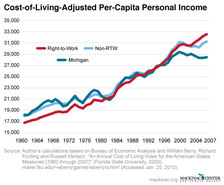 The UAW has put together a flier on right-to-work "facts" that it is handing out to union members. The pamphlet's facts are wrong.

I'll stay away from some of the statements that are more nuanced — for example, the UAW says the law requires them to provide services for all employees in a union shop, but neglects to mention that they fought to make that the law to increase bargaining power. Instead, I'll focus on the figures that are demonstrably untrue.

Claim: "Workers in free bargaining states make on average an astounding $6,590 or 17% more annually than their counterparts in right to work for less states."

Fact: Unions and others on the left cannot make up their mind on what numbers to use. Other anti-right-to-work groups list the number at $1,500 per year. Some of this is simply by using old data; since right-to-work states are growing faster in people, jobs and income than forced unionization states, especially during the recent recession. The former has caught up to the latter.

Fact: According to the Bureau of Labor Statistics, employees in right-to-work states have a slightly lower injury rate and a slightly higher fatalities rate. In truth, there is no correlation between a state's unionization rate and safety. Federal laws regulate all workers. Workplace deaths are extremely rare and have more to do with what industries take place in a given state. Deaths are concentrated in areas like farming, fishing and forestry, which is irrelevant to union status. Oklahoma became a right-to-work state in 2001, and from 2000 to 2010 its workplace injury rate decreased nearly 40 percent.

Fact: There is no evidence of this. The trends in poverty have been close for each batch of states: poverty in forced unionization increased slightly more over the past decade and in Michigan it increased the most of all states. The number of people without health insurance also was similar: the number of uninsured in right-to-work states increased slightly more than in forced unionization states. It is unlikely that a state's right-to-work status has much to do with this.

Claim: "Education is more of a priority in free bargaining states and right-to-work states have lower test scores."

Fact: Even the liberal Politifact rates this claim as "false." During fights over union issues, the Michigan Education Association and the Democratic Party in Wisconsin both made similar claims and both were forced to remove the information from their websites. There is a lot that goes into student test scores such as the socioeconomic background of students and whether the teacher is or is not in a union is not one of them.

The flier also gets the number of right-to-work states incorrect. Michigan and Indiana have joined the pack, but the union flier does not account for this.

Debates about public policy are good, and it is nice that the union is striving to prove its value to membership now that those workers have the freedom to choose whether they want to belong. But factual debates will help people make better decisions.