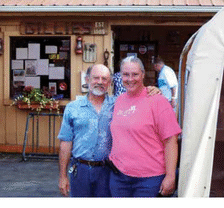 The Mackinac Center for Public Policy is funded solely by freedom-loving individuals and organizations that find value in its conviction of free-market principles. For this issue of IMPACT, we hear from Dave Gillie. He and his wife, Cindy, own Gillie’s Coney Island Restaurant in Mt. Morris, Mich.

MCPP: What were the reasons or circumstances that helped craft your decision to do what you do for a living?

Gillie: My Dad was a builder and rented out houses, leading to me learning the rental business and getting a builder’s license to build Gillie’s Coney Island Restaurant. He did this in addition to working full-time at General Motors.

I used my restaurant work to pay my way through college, hoping for a 9-5 office job, but discovered I enjoyed the fun challenge of restaurant work. So [I] decided if I were to stay in this industry, I wanted more control and money by becoming an owner. I found out later that due to excess silly government regulations, I really did not have much more control and making money became harder each year.

MCPP: How many employees do you have at the restaurant?

MCPP: When did you first hear about the Mackinac Center for Public Policy?

Gillie: I met Joe Overton in the Libertarian Party of Michigan before Mackinac Center opened; he influenced me to be a donor since the beginning.

MCPP: What is your interest in freedom and liberty?

Gillie: I learned entrepreneurship from my father as I worked with him from a very young age. There, I saw the benefits of a free economy, but I also saw and heard the problems of excess government taxes and regulations first-hand. Not “fitting in” as a youngster also influenced my thinking. Then in college I was influenced by the new Libertarian Party’s educational efforts.

MCPP: What value do you think the Mackinac Center gives people?

Gillie: It gives people studies and facts regarding freedom and liberty, which helps influence how laws are made and administered to the benefit of the general welfare of all of society.

MCPP:  What policies would you like changed in Michigan?

Gillie: Anything that would increase individual liberty. I believe there is one change that the State could accomplish that would be absolutely FREE of cost to them and would help them and people as individuals. Simply train all levels of State employees to be a bit more flexible, talk nicer and treat citizens with respect as they do their job.

MCPP: What kind of discussions takes place at the restaurant?

Gillie: Interacting with so many employees and hundreds of customers daily involves discussion on every subject you can imagine. Politics is a common one and there are a lot of different sides represented but it always has amazed me how much more common sense and freedom-loving the average person is compared to politicians and government in general. It makes one wonder where government gets its mandate to do the many crazy things it seems to do on an increasingly regular basis. The politicians that visit the restaurant often blame an unaccountable bureacracy that has  evolved over the years to rule over us more than any elected official possibly could. Scary thought.