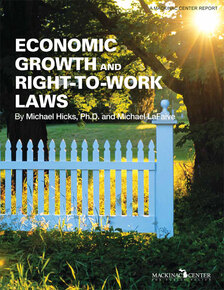 The Mackinac Center for Public Policy released a new right-to-work study titled, "Economic Growth and Right-to-Work Laws" in which these authors find that states with right-to-work laws do better economically — sometimes much better — than they otherwise would have.

A right-to-work law prohibits workers from being forced to financially support a union.

A fuller explanation of our findings can be located on the Mackinac Center’s website and in a table summary on page 7 of the study.

We are not the only scholars to tackle the question as to whether right-to-work laws have an impact on the economic well-being of states and their citizens. Indeed, the subject is a frequently researched one, and we highlight several of the most important studies throughout our own work.

Our conclusion is that right-to-work laws can have a positive — sometimes a very positive — impact on the economic well-being of people and their citizens.