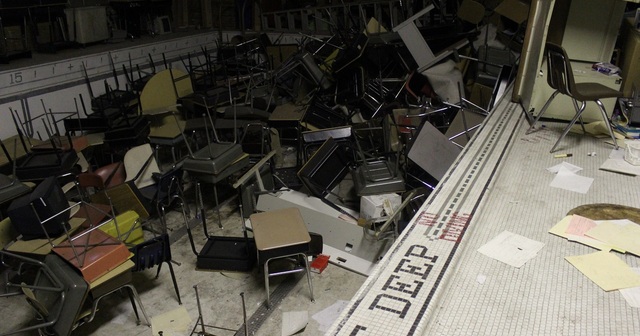 “Isn’t that awful?" Friedman asks. "What can [students] conceivably learn under such circumstances?"

You'd think that public education would have dramatically improved since then, away from a system where a student's school is determined by his or her home address; away from a system that too frequently results in mediocre or dismal outcomes for students. And yet, three decades later, there are too many Michigan schools that resemble the one Friedman visited.

In 2012, the Highland Park School District — a small school district in the heart of Detroit — shut down because the district ran out of cash. Officials were spending $20,000 per student, and yet there were rodents in classrooms, holes in school ceilings and walls and the bathrooms were filthy. Student academic scores were similarily dismal.

I have visited Highland Park schools a number of times this year, and the most striking visual that reflects the district's mismanagement are the school swimming pools. Long defunct, they were heaped to overflowing with broken furniture and trash. At what point do school officials look at a historic pool in a school building and think that the best use is to fill it with garbage? I suppose when they begin to think that things will not get better.

As Friedman put it in 1980: Isn't that awful? What can students conceivably learn under such circumstances?

Instead of despondently accepting that this will always be the state of some public schools, we can look to Friedman's writings for a way to provide all students with better options.

In his 1955 essay, "The Role of Government in Education," Friedman considered several arguments for government involvement in education. He wrote that the strongest is that we all benefit if students are provided with a quality education.

This argument, Friedman wrote, can be used to justify requiring students of a certain age to attend school and to use tax dollars to pay for their education. But, it cannot alone be used to justify the state-run school system we have today.

In our system of government-run schools, political influence has pushed (and will always push) policy proposals that have little to do with providing a qualtiy education to students.

Last year, the proposal put forward by union officials would have enshrined teacher collective bargaining agreements into the state constitution. This year, some still are suggesting that school choice is detrimental — not because of academic outcomes, but because allowing students to leave failing schools puts failing schools at risk.

Fifty years later after that 1955 essay, Friedman described his proposal:

We need a system in which the government says to every parent: "Here is a piece of paper you can use for the educational purposes of your child. It will cover the full cost per student at a government school. It is worth X dollars towards the cost of educational services that you purchase from parochial schools, private for-profit schools, private nonprofit schools, or other purveyors of educational services. You may add from your own funds to the voucher if you wish to and can afford to.

Unfettered school choice has the possibility to alleviate some of the worst problems that plague our educational system today. Imagine if the students at Highland Park schools had been able to take a certificate to any school, public or private, instead of having to stay in a district they knew was failing them. Indeed, it would have been better for the Highland Park school district to fail, instead of churning through students and money until the governor stepped in and declared a financial emergency.

In 1997, the Mackinac Center for Public Policy published a comprehensive study proposing a universal tuition tax credit, which would have saved taxpayers hundreds of millions of dollars and would have allowed students to use tax credits to attend any school of their choosing. This proposal would have helped more students escape struggling schools and is in line with what Friedman proposed.

Unfortunately, comprehensive school choice remains out of reach in Michigan. Our state is the only state that has a constitutional prohibition against educational tax credits or vouchers that students could use at any public or private school. Past efforts to remove this ban have been unsuccessful.

Though the idea was once unpopular, it is certainly the next best step for Michigan. Sixteen states, including Florida, have implemented private school choice and have seen dramatic results.

In honoring Friedman, it is important to think about his vision for education and how to get Michigan to a point where students and families at all income levels have a wide range of educational choices.