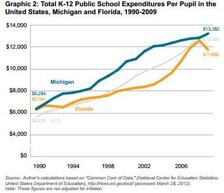 Over the past two decades, public school students in Florida have made the second-highest gains in the nation on standardized test scores while overall spending on education has increased the least.

By contrast, and despite the impression given by unions and school officials in the conventional public school system, district spending in Michigan increased substantially higher than Florida while returning lower results.

A comparison of the two states documenting the numbers as well as answering why this is happening comes from a new study from the Mackinac Center for Public Policy.

Yet, every year from 1990 to 2009 Michigan spent more per pupil than Florida and the Sunshine State served a larger share of low-income students.

"Florida's students, especially those from low-income backgrounds, have been making substantial and unmistakable learning gains for more than a decade," said Michael Van Beek, director of education policy at the Center and the author of the study. "Michigan policymakers should take notice. There's a lot to learn from this other peninsular state."

Van Beek said the reason for the gains are likely due to educational reforms in Florida leading to greater accountability for schools, and educational choice for parents and students. He wrote in the study:

Immediately prior to and during Florida's remarkable improvement, the state made substantial changes to the policies that govern its public education system. These included a new school accountability system, clear limits on social promotion, considerable expansions in the schools that parents could choose from, resources on literacy, and alternative routes to certification for aspiring teachers. Some of these policies have been rigorously studied and shown to have a positive impact on student achievement in Florida.

"Florida's reform model focuses on creating the incentives for public schools to improve, both from the state level and the local level, through parent-driven accountability," Van Beek said. "There's no silver bullet here, but Florida's example should be considered when setting the agenda to improve Michigan's public education system in the years to come."

Study: Michigan Should Look to Florida to Improve Public Education