Cost of film subsidy program would repair over 5 million potholes 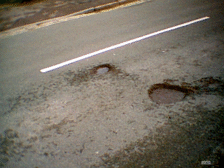 The Republican-controlled Michigan Legislature has passed a budget allocating $50 million for the state's film subsidy program.

Previously, the budget from House Republicans proposed eliminating the program, while Gov. Rick Snyder, who has said he is philosophically opposed to the program, asked for $25 million. But the GOP and Democratic leadership in the Michigan Senate wanted a minimum of $50 million annually.

Meanwhile, Michiganders are being told by the governor, legislators and outside groups that the state needs to devote more money to fixing the roads. That is true, but before legislators impose a tax increase on residents they should end the film program and use the money for infrastructure.

After all, if road funding is so important that it would literally "save lives," as advocates of increased road spending say, how many lives are the Legislature and governor risking by spending millions on subsidies to Big Hollywood?

Here is what taxpayers could get for the $50 million lawmakers are pledging toward films for the upcoming fiscal year (all numbers are approximate):

For a lot of reasons, film subsidies are one of the least efficient ways to use public dollars. Since the program began in 2008, the state has spent $400 million — that's an awful lot of unfixed potholes.

* There are few sources for the cost of repairing potholes. According to the Calhoun County Road Commission, it costs an average of $9.41 to fix a pothole.