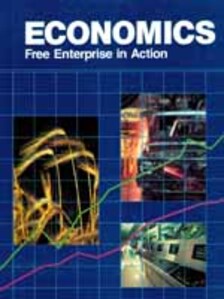 This book is very weak in training the student how to think like an economist. The author rarely works through economic issues in ways that get the student to think about results rather than intentions, to weigh all costs and benefits, to consider changes in incentives and other secondary consequences. The book often contradicts its subtitle, "Free Enterprise in Action." For example, O’Connor shamelessly misleads students with the assertion that "Price controls are adopted because the price system is unable to reach equilibrium on its own," a statement that would embarrass today’s most orthodox statist economic planner. Markets tend toward equilibrium by definition; equilibrium is lost when government interferes with the market on behalf of people who don’t like the market’s results. The book’s section on taxation is all description and no analysis. The discussion of supply-side theory is misleading. Keynesian theory on the business cycle is recited, yet its most serious drawback in the minds of many economists—that government spending and borrowing merely crowd out private spending and borrowing—never appears. And O’Connor makes central economic planning seem entirely beneficial and non-controversial.