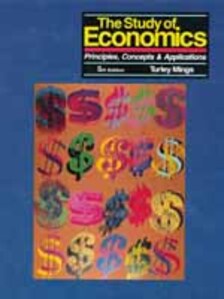 The fifth edition of The Study of Economics introduces economic concepts through examples from current issues, such as the fall of communism, the information superhighway, NAFTA, deforestation, and health-care reform. But while its examples are up to date, its research is not. Mings fails to incorporate much economic research of the last two decades on monopoly, taxation, regulatory agencies, and business cycles. Students come away with a benign view of government and a perception that market failure is rampant. Mings’s examples are often those used by Keynesians in the 1940s, not those used by most economists today. The text ignores the problems of government regulation and the adverse effects it has on economic growth and entrepreneurial activity. Mings’s analysis of poverty is very weak. He fails to include recent research in public choice theory, and scarcely a paragraph is devoted to a discussion of the entrepreneur. While his treatment of topics such as wages, labor, and trade are generally good, his overall treatment of economics is misleading.