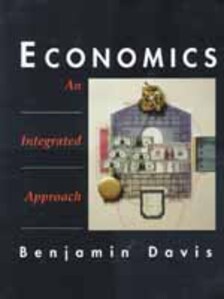 This textbook is for the most part good at teaching students how to think economically. The author concentrates on substance and the writing is engaging and often witty. But the coverage of the main topics is uneven—sometimes enlightening, but in other places very shallow. His explanations of the laws of supply and demand, equilibrium prices, shortages and surpluses and other fundamental concepts are very clear. His discussion of the impact of price controls—using agricultural price supports and rent controls as examples—put to work the student’s ability to think economically, and simultaneously demonstrate that good intentions can still yield bad results. Davis seldom tries to smuggle in normative conclusions under the guise of positive economics, but he is not entirely free of that vice. One example: He repeats the oft-quoted statistic that women earn only 70 percent as much as men do for equal work as proof of discrimination despite persuasive evidence that these differences are due to different family roles. Thomas Sowell and other economists have long pointed out that statistical differences do not constitute proof of discrimination.