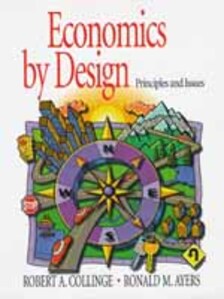 This book is an excellent teaching tool. On almost every page, it illustrates the economic way of thinking and trains students to look below the surface to perceive economic effects they would otherwise miss. The authors show that economics is not just about production and trade, but extends to all purposeful human action. For example, they even discuss the economics of crime and explain the phenomenon of black markets and their role as a safety valve when the government suppresses the activity of the market. The authors show that the choice between "the chaos of the market" and "the rationality of central planning" (as it is so often phrased) is a false choice. For example, they cite the Nigerian government’s foolish purchase of far more cement than could be unloaded at port, which eventually hardened in the holds of ships. The writing is engaging and clear. The only drawback to the book is that it is aimed at advanced high school students or college students.