Require a 2/3 majority vote of the State House and the State Senate, or a statewide vote of the people at a November election, in order for the State of Michigan to impose new or additional taxes on taxpayers or expand the base of taxation or increasing [sic] the rate of taxation.

This section shall in no way be construed to limit or modify tax limitations otherwise created in this Constitution.

Should this proposal be approved?[1]

The statement that the proposal “in no way be construed to limit or modify” existing constitutional tax limitations means that the proposal would not change tax provisions of the “Headlee Amendment,” described below, or the requirement of a three-quarters supermajority vote of both the House and Senate for any increase in the state education property tax.[2] The latter limitation was enshrined in the state constitution as part of a 1994 school finance ballot proposal known as “Proposal A.”[3]

The actual language that Proposal 5 would place in the state constitution is not much longer than the 70-word ballot summary shown above. Hence, Proposal 5 is the shortest — and arguably the most straightforward — of the proposals submitted to voters in November. A “yes” vote would mandate a two-thirds vote threshold in both chambers of the Legislature to raise state taxes other than the state property tax (which would still require a three-quarter vote supermajority). A “no” vote would reject the proposal, and the state would maintain its existing vote requirements (a simple majority in every case but the state property tax).

The concept of legally restricting the ability of lawmakers to raise taxes is not new. The oldest tax limitation measure on record dates to 1875 and is designed, according to scholars Steven Deller and Judith Stallmann, to limit property tax rate growth in Missouri.[4] In 1932 and 1933, some 16 states, including Michigan, adopted some form of tax limitation.[5]

There have been notable tax limits adopted in more recent years. In June 1978, one of the most famous tax limitations — Proposition 13 in California — was adopted by that state’s voters.[6] Among other things, it cut property tax assessments and capped their rate of increase; required both chambers of the state Legislature to obtain a two-thirds supermajority vote if they wanted to raise taxes; and mandated a two-thirds supermajority vote of the local electorate for any special taxes that might be levied.[7]

California’s Proposition 13 was followed quickly in Michigan by the adoption of the Headlee Amendment in November of the same year.[8] The measure, named for Richard Headlee, its most prominent proponent, has four main provisions, which Mackinac Center President Emeritus Lawrence W. Reed has summarized as follows:


Preventing the state Legislature from reducing money provided to local governments below 48.97 percent of state outlays.[9]

As noted earlier, the Headlee Amendment’s tax limits, though not involving a supermajority requirement, would themselves remain unaffected by Proposal 5, given the explicit language of the proposal.[*]

Also passed around that time was Missouri’s “Hancock Amendment,” which required a vote of the electorate to approve any increase in the percentage of state income taken by state government as revenue.[10] Some years later, in 1992, the most restrictive tax limitation in the country was passed in Colorado. Known as the “Taxpayer Bill of Rights,” the amendment prevented state spending and revenue from growing faster than the sum of the percentage increases in population and inflation.[11]

Legislative supermajority tax vote requirements are arguably a type of tax limitation, though in academic discussions, they are often treated as if they constitute a separate category. A list of STVRs throughout the country, taken largely from a study published by the National Conference of State Legislatures, appears in Graphic 1. 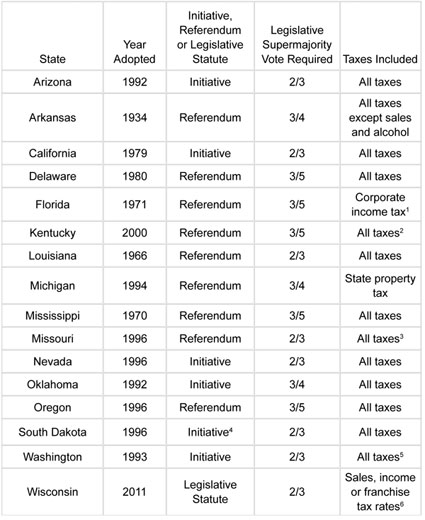 Graphic sources: Bert Waisanen, “State Tax and Expenditure Limits -- 2010,” (National Conference of State Legislatures, 2010), http://goo.gl/4uRYj (accessed Oct. 21, 2012); Jason Mercier, “Tax Restrictions Across the Country,” (Washington Policy Center, 2012), http://goo.gl/w9XRV (accessed October 20); “States With a Supermajority Requirement to Raise Taxes,” (Americans for Tax Reform), http://goo.gl/uCUYo (accessed Oct. 25, 2012).
Note that Americans for Tax Reform would place Colorado on this list because the Colorado Constitution includes a two-thirds legislative supermajority tax vote requirement for state or local emergency taxes. See Colorado Const, Art 10, § 20(6).
N.B.: Most notes below are transcribed verbatim from Waisanen’s study for the National Conference of State Legislatures, cited above.
1.   Constitution limits corporate income tax rate to 5 percent. A three-fifths vote in the Legislature is needed to surpass 5 percent. If voters are asked to approve a tax hike, it must be approved by 60 percent of those voting to pass.
2.   Tax and fee increases can be voted on by the Legislature in odd-numbered years.
3.   If the governor declares an emergency, the Legislature can raise taxes by a two-thirds legislative vote; otherwise, tax increases over approximately $70 million must be approved by a vote of the people.
4.   The National Conference of State Legislatures indicates that South Dakota’s supermajority requirement resulted from a referendum, but the requirement appears to have been the result of an initiative.
5.   Tax increases producing revenue that do not exceed the spending limit must be approved by two-thirds legislative vote; tax increases that produce revenue over the limit must receive two-thirds approval by the legislature and voters. The two-thirds tax increase supermajority was suspended for two years and reduced to a simple majority through June 30, 2007, by legislation enacted in April 2005. It was again suspended by 2010 legislation, requiring a simple majority through June 30, 2011.
6.   See Wisconsin Act 9 of 2011.

[*] The exact language that Proposal 5 would place in the Michigan Constitution on this issue is identical to the ballot summary language: “This section shall in no way be construed to limit or modify tax limitations otherwise created in this constitution.” See the Appendix of this Policy Brief for the complete language of Proposal 5 (as opposed to the ballot summary quoted in the text above); see also “Initiative Petition Amendment to the Constitution,” (Michigan Office of the Secretary of State, 2012), http://goo.gl/PSI08 (accessed Oct. 21, 2012). 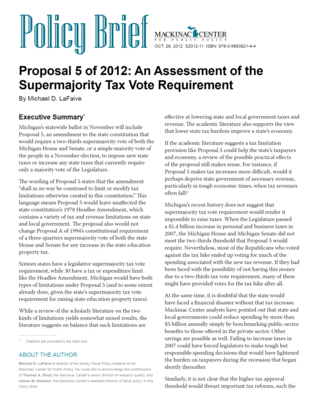