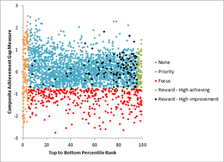 A chart created by the Michigan Department of Education showing how focus schools compare to other Michigan schools.

Recently, many Ann Arbor parents received a letter informing them that there was a relatively large gap between high-performing and low-performing students in their child's school. They could, the letter said, choose to transfer their child to another school with a smaller achievement gap.

The letters were to communicate a new school measure created by the Michigan Department of Education in response to federal policy. Schools identified as having a larger-than-average gap between the top 30 percent of student test scores and the bottom 30 percent of student test scores are now labeled as "focus" schools, regardless of overall performance.

For some Ann Arbor schools, the state's attempt to find another measure to identify poor-performing schools seems absurd: Ann Arbor's Angell Elementary School was labeled a focus school, despite the fact that the school ranks in the 98th percentile of Michigan schools.

The case of Ann Arbor's focus schools highlights the difficulty of using broad, statewide policies and measures to increase accountability and to force schools to implement reform.

Michigan is in an interesting position: State politicians and officials have been pursuing significant education reform measures, such as improving teacher tenure and evaluation rules and encouraging cross-district choice. However, these are tweaks to the state-run education system, and their impact, while promising, is unknown. Moreover, as legislators implement reform, they are also expanding the state's influence over Michigan schools.

The state of Michigan now tells public schools how much to spend on health insurance, which teachers to terminate and, perhaps soon, the best way to evaluate a teacher's performance.

These reforms are certainly laudable, and will help Michigan reduce its education costs while increasing educational choice for families. But, as is already playing out in the federal health care debate, the expansion of government influence can be easily used to advance the latest whims of whichever political party is in power. The best protection for taxpayers is to limit that expansion of power, regardless of what reform is peddled.

The best way to enable Michigan parents to enroll their child in a positive learning environment would be to allow a certain amount of state money to follow each student to any chosen school. The decision of what constitutes a "failing" school would be left up to parents and children, and parents would have great leverage — the ability to take the dollars associated with their children to another school — to demand quality education.

This would allow parents to support educational innovation the state has not anticipated or has blocked. For example, allowing dollars to easily follow students could also help address the state's restrictions on online education funding. Parents could also choose schools that do manage to provide for all employee health care costs while providing a quality and cost effective education.

Sadly, this level of educational freedom is prohibited under Michigan's Constitution. Article VIII, section two states in part that:

No payment, credit, tax benefit, exemption or deductions, tuition voucher, subsidy, grant or loan of public monies or property shall be provided, directly or indirectly, to support the attendance of any student or the employment of any person at any such non public school...

And this prohibition isn't usual: Michigan is the only state with a constitution that prohibits both school choice voucher and tax credit programs.

The Mackinac Center has been pointing out for years that this prohibition means that the most promising mechanisms for improving education are not an option in Michigan.

Though Florida's education tax credit program has been shown to help increase student achievement, it can't be replicated in Michigan. Though Arizona's educational savings account program has helped Arizona special needs students access quality care, it isn't available in Michigan either. Though quality research has shown that voucher programs improve academic outcomes for student participants, those programs will not available in Michigan as long as the constitutional prohibition against them remains in place.

Without major constitutional reform, parents, schools and taxpayers can look forward to more state-driven education policies that may be a good idea for the average school, but are an ill fit for others.

​​​​​​​Getting a Fuller Picture of Education Choice