A 'Business as Usual' Comeback? 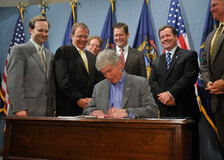 The MichiganVotes.org weekly roll call report that just went out to newspapers all over the state contains suggestions that the reform momentum generated by the 2010 election may be giving way to complacency and a reluctance to rock the government establishment's well-appointed yacht.

The report wasn’t all bad, because it also cites passage of a bill allowing parents whose children are in a failing public school to convert it into a charter school, another advancing the date of a modest state income tax cut, some modest property rights reforms for sand dune construction regulations, and several other pro-freedom items.

But contrast the following bills included in the report to what happened in Wisconsin recently, where voters in effect confirmed major reforms enacted there last year:

None of these bills would have passed without support from a majority of Republicans in either the House or Senate.

Adding to the discomfort, pension bureaucrats and the teachers union appear to have successfully stalled a Senate-passed bill to close the defined-benefit school pension to new hires, a transformational reform that would pay dividends for decades to come (it’s not dead but may be delayed until next fall).

Some of the bills cited in this report involve genuinely hard choices, and the legislators who supported them can refer to valid arguments in favor. But during the fall of 2010, most of those same politicians were making claims to tea party members and sympathizers that implied behavior very different from what these votes suggest.

In addition, last year a new Legislature went along with Gov. Rick Snyder’s innovative proposal to use incentive payment "carrots and sticks" to drive needed reforms in the institutional "culture" of public schools, universities and local governments.

This year, a parade of taxpayer-funded lobbyists hired by those institutions spent countless hours in committee hearings and one-on-one meetings convincing these same politicians that "business as usual" really is the right way to go. The result has been a considerable watering down of these reforms from what Gov. Snyder proposed.

This Legislature can rightfully boast that it has enacted many critical and even potentially transformational reforms — 25 of them are listed here. But the votes listed above create a sense that reform has lost momentum, replaced by complacency for the system-serving policies and practices that contributed to Michigan’s economic malaise of the last decade.

It’s almost enough to make one wonder whether legislative term limits should be tightened — the case for "one year and out" may be getting stronger.