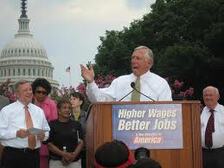 If some legislators have their way, the state would gradually raise its minimum wage to $10 per hour and adjust it to inflation.

This would give Michigan the highest mandated minimum wage in the nation. It would also greatly harm the majority of workers and businesses in the state.

Some questions for Sen. Johnson and those who support the proposal:

The vast majority of economists agree that a higher minimum wage is an overall harm to the economy and workers — especially low-income and low-skill workers who are the first to lose their jobs when the minimum wage goes up.

Even the late moderate/liberal economist Paul Samuelson wrote in 1970 about a proposed increase in the existing minimum wage of $1.45 an hour, "What good does it do a black youth to know that an employer must pay him $2 an hour if the fact that he must be paid that amount is what keeps him from getting a job?"

Raising the minimum wage also disproportionally harms small businesses, which often are only marginally profitable and would have to spend a greater amount of time and money dealing with this new regulation. This is why large corporations like Wal-Mart have long advocated for a higher minimum wage — these companies already pay significantly higher than the federal minimum and are able to use government to limit their "mom and pop" competition.

My colleague Michael LaFaive summed this up best when he said, "The research says that the only true minimum wage is zero, which is what many people find themselves making as a direct result of being priced out of jobs as a result of government mandates."