Font size:
Government is not good at picking winners.

Michigan's transportation system is crucial to the state's economic progress. In 1997, the Legislature raised the gasoline tax, enacted reforms to cut the costs of road building and maintenance, and embarked upon a major, long-overdue repair effort. With the condition of the roads now clearly improving, transportation funding and related issues have slipped off the public's and the Legislature's radar screens. The Legislature in 1999 should elevate transportation to an important matter once again and address the need for the following four reforms.

Michigan is the only state in the union with county road commissions. While there are many exceptions, the commissioner positions and the entire commission organization are often patronage machines at their finest. With the state and federal governments providing the bulk of money for county and local operations, there is little incentive for local government to consider changes to an age-old system that offers many public employment jobs and too often tolerates poor performance and high cost in maintaining roads.

Since 1951, most state road tax and fee revenues have been divided according to a controversial formula that provides 36.1 percent to state government, 36.6 percent to county road commissions, 18.8 percent to cities and villages, and 8.5 percent to transit agencies (see Chart 13). The Legislature must review the formula by which state fuel and vehicle-registration taxes are distributed. Distributions cease if no new formula is enacted by September 30, 2000.

There is no particular merit to these percentages; they are the result of many amendments to the original formula of 1951, proposed in response to transient political issues. The formula has grown complicated and difficult to understand, and the original guiding principle has been forgotten under layers of amendments and handouts to favored programs. The heated discussions of the formula and how it might be changed have degenerated into a free-for-all, with each level of government arguing for a bigger share of the pie. Local units in particular seem to want to turn the formula into are venue-sharing scheme first and foremost. Which roads attract the most actual traffic has taken a back seat to the grab for more money.

There may be no one right way to distribute motorist taxes, but before the system is overhauled, legislators should adopt these principles to guide the debate:

The distribution formula should be simplified, and earmarked funds and special programs should be eliminated. If the formula is adequate, clumsy fixes like the Local Program, the special distributions of the 1997 tax-increase revenues, and the Economic Development Fund (which dispenses transportation dollars to localities according to the number of jobs new industries in their areas claim to have "attracted" or "retained") will not be needed.

Although the share of motorists' taxes given to mass transit was reduced in 1997, the total amount given to transit continues to increase. The Legislature should permanently reduce the mandated share of gas tax revenues allocated to mass transit. The 1990s saw palatial bus stations built on potholed streets that made every bus trip a trial; possibly the best thing that could be done for transit in Michigan is to devote more transit aid to road repair.

It's also time to clear the books of the $100 charge paid by Michigan truckers for the privilege of being regulated by the Michigan Public Service Commission (MPSC). Trucking has been deregulated, and there is no clear authorization for the use of this money for anything. By the time it bounces from the MPSC to the Motor Carrier Division of the State Police, there's little or nothing left for the Transportation Fund, anyway.

Invariably, when the Legislature gets around to addressing transportation issues, some lawmakers are tempted to get into the business of picking winners and losers. The Mackinac Center cautions against any legislation designed to provide artificial boosts to gasohol, electric cars, propane burners, passenger trains, flywheel-powered buses, and other politically favored (but not necessarily economically viable) technologies. Government is not good at picking winners.

Nearly four years after its publication, the Mackinac Center's Fixing the Roads report continues to be one of the most comprehensive of its kind, with many suggestions for reform that deserve renewed attention in the Legislature.

These reforms include increased competitive bidding for road repair and construction projects, changes in land acquisition procedures, greater application of value engineering concepts in road type and design standards, tort reforms to minimize frivolous claims and payments, and the streamlining of MDOT. 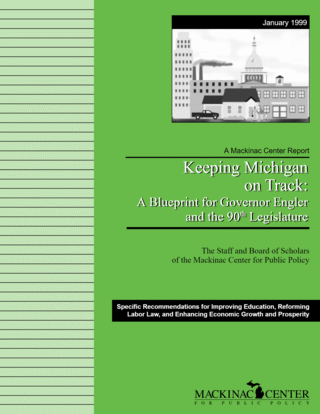