The award-winning administrator wears many hats at school 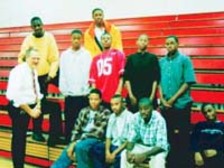 Principal Siefker, at left, will have another opportunity to demonstrate his sense of humor when he sees this photo taken with some of his admiring and spirited students.

Roy David Siefker is more than an ordinary principal.

To students at Detroit Urban Lutheran Schools, he is a big brother and occasional surrogate father.

At any given time of the day, he can be found sweeping the floor, painting the hallways, coaching the junior varsity basketball team, cutting school yard grass or using his barbering skills to give a child a free haircut.

"There is nothing that David can't do," said Deborah PeekBrown, whose son Aaron is in the seventh grade. "David has a caring relationship with every student in the school and has taken the children under his wings. He drives them home if they need a ride and takes them places on the weekend.

"Every month he cuts my son's hair for free. It saves me money."

Not only are parents aware of Siefker's contributions, but so are many of his peers. At a retreat last summer, he was named Administrator of the Year by the Michigan District Lutheran Principals Conference. The decision was based on his close relationship with the Lord and his ability to provide children with a Christ-centered education.

"The award was a complete surprise to me," said Siefker, 54, who prefers people to address him by his middle name. "I'm humbled.

"I've received many awards over the years, but I don't put one award over the other. I put the children first. What also gives me joy is to be able to serve the community, to see the students' accomplishments on a daily basis."

The school has been K8 for 23 years. The high school component was added four years ago. The school will hold its first high school graduation June 1999.

"I'm not the superman who is doing everything," said Siefker, who also serves as the school's art instructor. "I have good teachers, support staff and parents who are helping me in my endeavors. We have always referred to ourselves as 'The Detroit Urban Lutheran Family' and always will."

Where does he get the energy to perform the multitude of tasks?

"Certainly, my energy comes from the Lord," said the Indiana native who has served as principal since 1973. "And being able to serve in a Christian school and a Christian community is also a blessing."

"I was looking for a school for my daughter and I went to speak with Mr. Siefker. They told me he was in the gym. When I arrived in the gym, I saw a man sweeping the floor. I asked him where Mr. Siefker was and he said, 'I'm Mr. Siefker.'

"There is no job too small or too big for him to do," said Caldwell-Jones, whose daughter, Alanna, is a seventh-grader and son, Alan, is a fourth-grader. "He's like a foster parent to many children. Now that's what I call caring."

Locke, who has known Siefker for 15 years, said he is probably one of the outstanding principals in urban education. "David has a good relationship with parents and students, and he's pushing for high academic achievement," he said.

Siefker is optimistic about the future of Detroit students.

"One of our goals is to build a strong Christian community," Siefker said. "Here at Detroit Urban Lutheran, the fact that we work as a family is more than any single award. I thank the Lord for this opportunity to serve this community."

This article is reprinted with permission of The Detroit News.