Obamacare Exchange: The People or the Insurers? 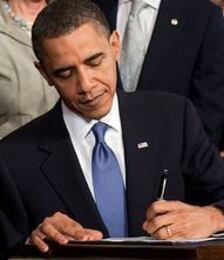 At a hearing Thursday of the Michigan House Health Policy Committee, Blue Cross Blue Shield and other insurance industry lobbyists pleaded for fast action on creating a state Obamacare “exchange.” Given their point of view, their desire for an accelerated timetable is understandable: As businesspeople, they hope to gain some certainty over Obamacare's endless details. The haste of employees at the Michigan Department of Community Health is similarly understandable, and at this time, they have the ear of Gov. Rick Snyder.

But many — even most — of the committee members' constituents have a more compelling priority: seeing the federal Patient Protection and Affordable Care Act swept onto the ash heap of history. From their point of view, creating an exchange now would only help entrench the big-government mistake known as Obamacare (six reasons why are listed here).

The insurance spokespersons' testimony tried to feed a sense of urgency, but free-market health care policy experts have demonstrated that the case for urgency is just not plausible. The “do-it-or-else” threat is that if Michigan is not well-advanced toward an operational exchange by 2013, the federal government will create its own exchange for the state, supposedly leading to a loss of state control.

Both parts of the threat are questionable. “Control” isn't really an option to begin with: The Wall Street Journal reviewed the federal health care regulations released last July and found: “The word ‘require’ appears 811 times in the 244-page rule and its 103-page supplement. ‘Must’ shows up 580 times — and this is merely [Health and Human Services'] first batch of exchange mandates.”

Initially, while HHS was still deciding how to implement the legislation, a narrow window of opportunity existed for states to pursue a “pushback” strategy of creating a restricted exchange and requiring it to contract with the state’s Medicaid program and insurance department to perform the eligibility, enrollment, and insurance regulation functions that state lawmakers seek to retain control of. HHS effectively closed that window in its proposed exchange regulations issued in July. …

The combined effect of these regulations and grant requirements [is] that a state would have to agree to surrender any last vestiges of meaningful control over how Obamacare is implemented. Thus, a state would now have no more real control over an exchange it set up than over one HHS established. … (Emphasis added.)

Nor will the feds be eager to step in with their own exchanges. Not only do they lack the capacity; due to goof-ups in the law, they lack even the authority to create and operate the exchanges. Specifically, the PPACA fails to provide funding for federal exchanges, and even more seriously, it doesn’t authorize payment through them of the insurance subsidies at the heart of Obamacare. In addition, it’s extremely unlikely that more than a few states will have working exchanges by then.

In 2012, Obamacare faces two mortal threats: A ruling by the U.S. Supreme Court, expected in June, and the judgment of an even higher court on Nov. 6 — the presidential election. If Obamacare survives both SCOTUS and VOTUS, there will then be time enough to create a state exchange, and the arguments for doing so will carry more weight. Michigan will have plenty of company, too, with many other states also taking a wait-and-see approach.

Given this, prudent state lawmakers should ignore the false sense of urgency being generated by exchange supporters now.