In a perfect world, contributing the normal cost to a defined-benefit plan should be sufficient (when invested with the plan’s accumulated assets) to cover the future pension liability. In practice, however, contributing the normal cost alone can fall short of the plan’s needs for a variety of reasons, including lower-than-expected investment returns, unanticipated changes in members’ retirement patterns, modified actuarial assumptions and funding methods, and plan amendments, such as retroactive increases in benefits.[*] If the normal cost payments prove insufficient, then the annual employer contribution to a defined-benefit plan will require additional funding to reduce the unfunded liability.[†]

Defined-benefit asset performance from 1997 to 2010 has lagged the actuarially assumed rate of 8 percent annual growth. The author estimates the actual annual performance has averaged about 5.5 percent.[13], [¶] Therefore, had MSERS defined-contribution plan members remained in the MSERS defined-benefit plan, a contribution of the normal cost alone would not have been sufficient to cover the cost of the benefits.

To estimate the change in liability had the defined-benefit plan remained open to new hires, the author conducted a simplified analysis that prorated the unfunded liability in proportion to the hypothetically higher defined-benefit payroll.[**] The author acknowledges that this method could possibly overstate the additional liability that might have accrued, but he also acknowledges that this method could understate the additional liability that might have accrued. As a result, the estimate of any savings in unfunded liability will ultimately be presented here as a range of values, rather than a specific dollar figure.[††]

Using the prorated approach described, a policy decision to keep new MSERS members in a defined-benefit plan could have generated an additional unfunded liability of about $3.3 billion in 2010 (see Graphic 2). Given the simplifying assumptions in such a calculation, however, the author believes it is more appropriate to place the estimated additional unfunded liability in 2010 in a range from $2.3 billion to $4.3 billion. Developing a more precise figure is beyond the scope of this Policy Brief. 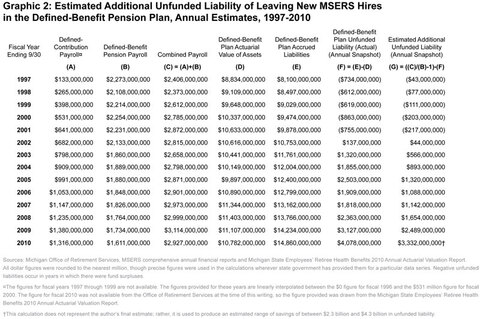 Sources: Michigan Office of Retirement Services, MSERS comprehensive annual financial reports and Michigan State Employees’ Retiree Health Benefits 2010 Annual Actuarial Valuation Report. All dollar figures were rounded to the nearest million, though precise figures were used in the calculations wherever state government has provided them for a particular data series. Negative unfunded liabilities occur in years in which there were fund surpluses.

†This calculation does not represent the author’s final estimate; rather, it is used to produce an estimated range of savings of between $2.3 billion and $4.3 billion in unfunded liability.

The Question of “Transition Costs”

Some contend that there is one other cost consideration related to MSERS’ unfunded liability. Generally speaking, when a defined-benefit plan is closed to new entrants, as MSERS was in 1997, the Government Accounting Standards Board requires that contributions toward reducing the plan’s unfunded liability be made on a level-dollar basis rather than a level percent of payroll. This results in higher initial contributions, which some have described as a “transition cost.”

Arguably, these higher contribution levels are appropriate. Public-sector pension amortization periods are frequently too long, in addition to the contributions being backloaded.  Higher initial contributions on the unfunded liabilities reduce the amount of intergenerational cost transfers — that is, current liabilities inappropriately being shifted to the next generation of taxpayers.  To consider these funding reforms as “undesirable costs” — or incorrectly, as “new costs” — mistakenly implies that more-timely contribution schedules are fiscally inappropriate.

It is also difficult to argue that the shift to level-dollar payments constitutes an extra “cost” from the closing of the MSERS defined-benefit plan during the years being studied. The MSERS defined-benefit plan did not have an unfunded liability when it closed in 1997, and when an unfunded liability later developed, the state usually failed to make the required contributions on that liability. Also of note, the change from level-percent to level-dollar payments had no impact on the actual benefits ultimately to be paid.

[*] Similarly, of course, normal cost contributions could ultimately exceed the funding requirements, perhaps because of higher-than-expected investment returns, plan-design amendments or favorable experience compared to the original assumptions. In such cases, the plan may show a surplus. This surplus may result in a future employer contribution that is less than the calculated normal cost.

[†] It should be noted that under the Michigan Constitution, these liabilities, which have already accrued, cannot be renounced. Michigan Constitution of 1963, Article 9, Section 24; see also, for instance, Patrick J. Wright, “MEA Lawsuit on Retiree Health Benefits Misguided,” (Mackinac Center for Public Policy, Aug. 9, 2010), https://www.mackinac.org/13341 (accessed May 8, 2011).

[¶] The rates of return can be, and have been, higher over different time periods. The most recent MSERS comprehensive annual financial report states, for instance: “For the fiscal year ended September 30, 2010, the total System’s rate of return was 8.5% as compiled by State Street Investment Analytics. Annualized rates of return for the three, five, seven, and ten year periods ending September 30, 2010 were: (3.8)%, 3.3%, 5.9%, and 3.1% respectively.” “Michigan State Employees’ Retirement System: Comprehensive Annual Financial Report for the Fiscal Year Ended Sept. 30, 2010,” (Michigan Office of Retirement Services, 2010), https://www.michigan.gov/documents/orsstatedb/SERS_2010_Published_1-10-11_342741_7.pdf (accessed March 17, 2011).

[**] Providing a more sophisticated analysis would require, to begin with, complete demographics for the active members and retirees who belong to the plan. This data is not publicly available. Moreover, debatable assumptions would have to be made in an attempt to reconstruct a hypothetical past. In the end, a more precise and sophisticated analysis might prove no more persuasive or accurate than the simplified approach used above.

[††] As discussed under “(1) Annual ‘Normal Costs’?” above, the defined-contribution payroll data used in the calculations in Graphic 2 below were available from state government only for fiscal years 2000 through 2009. The 2010 figure was taken from the Michigan State Employees’ Retiree Health Benefits 2010 Annual Actuarial Valuation Report, while the data for fiscal years 1997 through 1999 were interpolated between the known data for fiscal years 1996 and 2000. 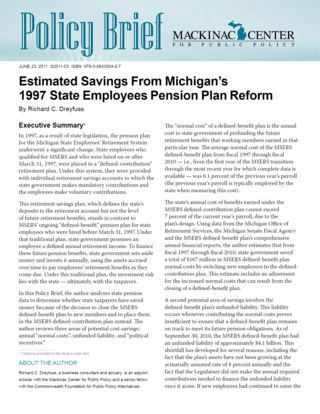