The NPEFS’ total revenues include not just local, state and federal revenue, but also revenue that school districts receive from “intermediate” sources.[17] Intermediate per-pupil revenues for Michigan school districts are very small compared to the other three revenue sources and have little impact on overall levels of school funding, so they were not discussed above.[*] They are included in the total revenue figures presented here, however.

Per-pupil total revenue for the city locale group also increased more quickly than that for the other three locale groups, growing by 15 percent from 2004 to 2010. This was largely due to a 25 percent increase in per-pupil total revenue for DPS, however; the other two city locale subgroups — midsize city and small city —increased by 13 percent, slightly less than the rural group (14 percent) and about the same as the town group (13 percent). The suburban locale group had the smallest growth over this period, with total per-pupil revenues increasing by 10 percent.

Among the 12 locale subgroups in 2010, DPS received the largest amount of total revenue per student: $14,407.[†] In fact, the midsize and small city subgroups ranked second and third by this measure. Next highest was the remote rural subgroup, taking in $11,770 per pupil. The small suburban subgroup had the lowest total per-pupil revenues in 2010: $10,486. 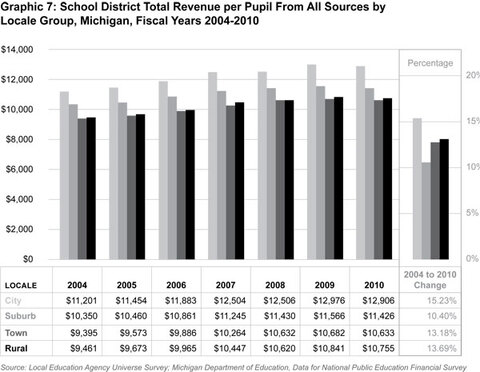