The National Center for Education Statistics bases a particular district’s locale code on the locale codes assigned to individual schools within each district. To determine a district locale code, NCES applies two rules:

The “urban-centric” locale code categorizes urban and suburban areas into subgroups based on their size, and categorizes town and rural areas based on their distance from urbanized areas and urban clusters. Distances are determined using straight-line or “Euclidean” distance. Although this methodology “does not account for the presence or absence of road networks that may offer point-to-point drive time estimates,” NCES justifies it by pointing out that it is not affected by transportation infrastructure modifications that could produce “significant fluctuations,” and it “provides data users with a simple and familiar concept that is analytically useful and relatively easy to implement.”[†]

The verbatim definitions of the 12 different locale codes appear in Graphic 29. 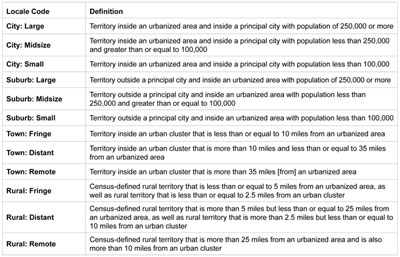 NCES uses the following definitions to clarify the terms contained in Graphic 29 (verbatim from original):[§]

Rural. The Census Bureau classifies all population and territory not included in an urbanized area or urban cluster as rural.

Urban (urbanized areas and urban clusters). The Census Bureau defines an urban area as a densely settled core of census block groups and census blocks that meet minimum population density requirements, along with adjacent densely settled surrounding census 10 blocks. When a core area contains a population of 50,000 or more, it is classified as an urbanized area (UA). Core areas with population between 2,500 and 50,000 are classified as urban clusters (UC).