On August 14, 1935, President Franklin Roosevelt signed the Social Security Act into law, declaring it to be "a law that will take care of human needs and at the same time provide for the United States an economic structure of vastly greater soundness."

Today, 63 years later, there is a growing realization among politicians and citizens alike that the government-funded retirement system begun by Roosevelt is not only financially and actuarially unsound, but is increasingly incapable of meeting the human needs of America’s growing elderly population.

Social Security operates as a pay-as-you-go system, meaning that taxes collected from current workers are used to support current retirees. Because the ratio between workers and retirees is rapidly shrinking, payroll taxes will either have to be hiked dramatically or retirement benefits cut significantly in order to keep the system afloat in the future.

Of course, neither of these options is popular with Americans. But polls show that there is broad public recognition of the fact that the future of Social Security, as it exists now, is bleak. In 1975, 88 percent of Americans were "fairly sure they could count on Social Security for retirement." Today, that figure is under 46 percent and still dropping.

As public awareness of the problem increases, what was previously untouchable as a political issue has now moved to center stage with the president and both political parties wanting to "save" Social Security.

How did Social Security come to be in such a mess? The current problems are caused not only by the original design of the program but are also the result of major changes in society over the decades since it was enacted:

A quick review of history shows how we arrived at the current state of affairs. 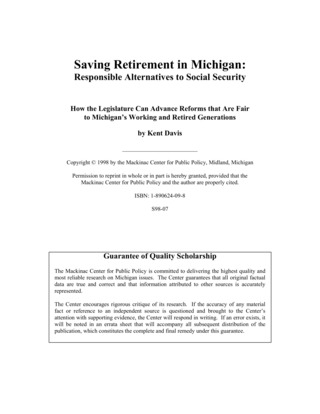