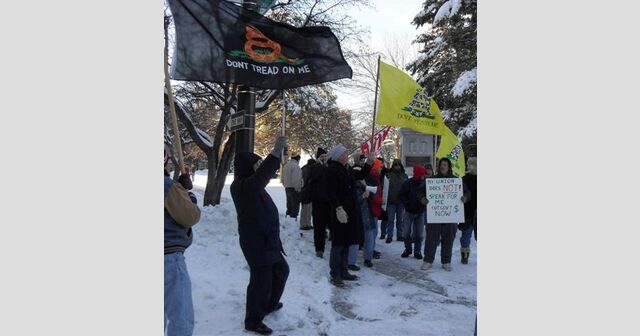 On one side of the street in front of the state Capitol Tuesday morning sat three idling charter buses that had brought in scores of school and government employees for a “lobby day” organized by the AFL-CIO, the Detroit Federation of Teachers and other unions, who oppose spending cuts in Gov. Rick Snyder’s state budget proposal.

On the sidewalk across the snowy Lansing street, about 40 individuals associated with different Tea Party groups stood in the 15-degree cold waving homemade signs and yellow rattlesnake flags, chanting, “Education, not occupation.”

One sign read, "Go Scott Walker — We Hear You." Walker is the governor of Wisconsin who proposed government union reforms there.

Don Kirby drove from Battle Creek to join the protest. “We don’t want our government to go broke,” he said. “They spend too much.”

Lansing Tea Party organizer Joan Fabiano said the counter-protestors drove their own cars to get here, not “fancy charter buses.” With a handheld megaphone she led the group in a chant aimed at the other side’s chartered buses: “Who paid for your buses? We’re unpaid volunteers!”

Leffler said that it was hard for the counter-protestors to get here: “We had to take a day off work and drive our own cars.” Referring to the buses that brought in the spending-cut opponents, he said the government employee unions are “too big, too powerful.”

Brian Downs of Rockford said getting to Lansing was a challenge with all the new snow, but thought it was important to send a message that the people support budget reductions. “Shrink government and cut spending,” he said. “Everyone wants a fair deal, but we don’t need bloated benefits for government employees.”

Public Union Reform Is Where the Money Is