Exploiting a Window of Opportunity

It's not every day that a signature idea of a think tank becomes the title of a best-selling novel. So when we got wind earlier this year that radio and television talk show host Glenn Beck was working on a political thriller with the Overton Window as its main plot element, we knew we had a unique window of opportunity.

The Overton Window of Political Possibility is a theory of change developed in the 1990s by the Mackinac Center's late vice president, Joseph Overton. The "window" represents the narrow range of policy options acceptable to policymakers at any point in time. Contending ideas, Overton observed, shift the window toward, or away from, liberty. His point was to show how think tanks can influence public policy.

In a June 15 column posted on AOL News, Beck wrote, “The Overton Window is a political theory developed by the late Joseph Overton, a brilliant public policy strategist and ardent free-marketer.”
More images …

After Overton died, Mackinac Center colleagues renamed his theory "The Overton Window." Joe Lehman, then-executive vice president of the Mackinac Center and a long-time colleague and friend of Overton's, taught and presented the theory to hundreds of participants of the Center's Leadership Conferences and at workshops around the country.

"The theory explains how think tanks like ours promote ideas that shape the environment in which lawmakers act," Lehman would explain. "Today's unacceptable ideas become acceptable. Yesterday's acceptable policies become unacceptable. You change ideas to shift the Overton Window of Political Possibility. Shift the window, and you change policy."

The fact that a media giant's best-selling novel would bear the title "The Overton Window" seemed the very embodiment of Overton's theory on the power of ideas. In the book, a concept birthed at "a think tank in the Midwest," as Beck's protagonist described, had reached the attention of one of the nation's top opinion leaders. Clearly, the publicity generated by the book would provide the Mackinac Center numerous opportunities to explain to a national audience the power of our ideas to advance sound public policy.

In anticipation of the countless thousands of people likely to search online for information on the book, Center staff created a dedicated Web page and secured related domain names, such as theovertonwindow.com. The page included a brief definition of the Overton Window, lengthier essays on the theory, a section addressing frequently asked questions, an interactive window and examples of Mackinac Center materials that advance ideas in the way the Overton Window describes. The Washington Post included a link to the site in its review of Beck's book.

Using search engine optimization techniques, we improved search rankings to ensure placement in the top five search results on Google and other engines. We updated and enhanced the Overton Window Wikipedia entry, created a facebook page and purchased Google and facebook ads to steer readers to Mackinac Center resources.

While this preparation was taking place, Beck's team was working out the details to have Lehman appear as the Overton Window "resident expert" on both the nationally syndicated radio show, The Glenn Beck Program, and the Glenn Beck show on Fox News. The combined audience would be between 10 million and 12 million viewers and listeners.

In May, Beck's creative director sent Lehman an advance copy of The Overton Window. Based on pre-order sales, the book was already a best-seller, even though it would not be released until June 15.

On June 9, Lehman travelled to New York City to be an in-studio guest on Beck's radio program. During the live, 11-minute segment, Beck said, "It is amazing to me that people don't know what the Overton Window is, because we use it instinctively."

The interview was carried live on 400 radio stations nationwide, including 15 in Michigan. The interview could also be viewed online at GlennBeck.com. Subscribers to Beck's "Insiders Extreme" were e-mailed a more robust video version of the radio interview and a separately produced video that included segments where Lehman explained the Overton Window and discussed it in the context of school choice. Subscribers were also e-mailed
a transcript of the radio interview.

Later that day, Lehman recorded a segment for Fox News that aired on June 16. Keeping with the program's style, Lehman explained the theory using a pointer and animated graphics that showed the spectrum of possible education and welfare policies. During the six-minute segment, Lehman and Beck exchanged ideas about how the Overton Window concept applied to political debates old and new. On June 17, GlennBeck.com featured additional footage of Lehman discussing the history of the Overton Window.

In the final segment, posted on the Fox News website, Beck and Lehman discussed "Overton's Revenge," the concept that politicians will pay a price if they stray outside the window. Lehman returned to the digital screen to explain how facts and logic, appeals to morality, emotional appeals and other factors contribute to the shifting of the window.

The response to this publicity bonanza was phenomenal. TheOvertonWindow.com drew nearly 30,000 unique visitors and led to more than 1,500 new Mackinac Center subscribers, from throughout Michigan and from New Hampshire to Hawaii. Contributors old and new sent checks to help the Center capitalize on the unprecedented publicity.

Lehman did follow-up interviews around the state and around the country. Columns highlighting the role of the Mackinac Center appeared in publications as diverse as National Review Online and the Detroit Free Press.

The marketing effort proved a prime example of cooperation within the free-market movement. The Mackinac Center partnered with the State Policy Network, the Institute for Justice, the Franklin Center, the Heritage Foundation, the Evergreen Freedom Foundation, the Pacific Research Institute and others to maximize the impact and reach the most people with our message. At least a dozen sister organizations prominently posted a link to theovertonwindow.com on their home pages, raising its visibility, directing traffic and improving the search rankings. Several e-mailed members about the page and Lehman's appearances. In the same vein, the Overton Window page and follow-up e-mails included a link to the State Policy Network's directory of state-based think tanks to introduce out-of-state visitors to the free-market think tanks in their states.

What began as a simple think tank theory of explaining how ideas affect culture ended up becoming a media phenomenon itself. As Lehman told Beck's radio audience, "There's nothing that Joe Overton would have liked more than to know that one of his concepts was making it smack dab in the middle of popular culture." 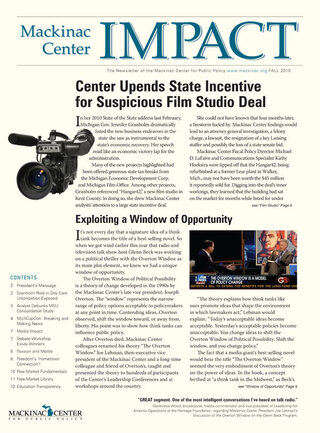