A Perfect Storm: Batten Down the Hatches or Drown (MPR) 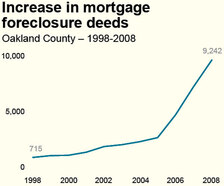 This graph shows the increase in mortgage foreclosure deeds executed by the Oakland County Sheriff’s Office since 1998. Municipal governments, which get property tax revenue, will have to adjust their spending as that revenue decreases due to home foreclosures, higher unemployment and fewer home sales. Source: Robert Daddow, Oakland County deputy executive

As Oakland County deputy executive, I often speak with state and local officials. Most of them realize that with the auto industry in crisis and the nation in recession, they face rough weather ahead. What they often don't recognize is that they're optimists.

In fact, Michigan governments face a perfect storm — a convergence of economic trends that will depress government revenues for years to come. Accounting gimmicks and "revenue enhancements" will fail, forcing policymakers to transform the delivery of public services to remain afloat.

Worse, the Big Three now face the double-whammy of a declining market share in a shrinking market. In the United States, about 16 million cars, vans, pickups and SUVs were sold in 2007, but the number will probably be about 10 million in 2009. Of these vehicles, the Big Three will be lucky to sell 4.6 million — just 60 percent of the 7.6 million they sold in 1981-1982, their worst year until now.

Other Michigan business sectors are in trouble too. Figures from the University of Michigan show that from 2002 to 2007, some 419 Michigan industrial sectors grew or remained stable, but another 641 declined. These 641 sectors shed 404,000 jobs, with an average income of $50,000 per year, while the growing or stable industries produced just 205,000 jobs, with an average income of only $36,000 per year.

Hence the storm: State government will lose revenue on three fronts, while local governments, which depend on property taxes and state revenue-sharing, will get less of both. Simultaneously, demands on government will grow. The state's 15.1 percent unemployment rate could go as high as 20 percent. The state unemployment trust fund, which has already borrowed $2.2 billion from the federal government, is sinking $200 million further into debt each month. This debt will force up unemployment payroll taxes on Michigan businesses.

Yet it won't make sense for state and local policymakers to raise the overall tax burden on businesses and residents. They are already struggling and underemployed.

Instead, government officials must focus intensely on restructuring their operations. This begins first with long-range planning: They should grapple right now with budgets for the next three years, not just this one. It's harder to deceive yourself when you're forced to look at a trend, rather than a single year's budget.

Second, employee pension and retiree health care benefits must be critically reviewed — the cost is too great to ignore. Many government units underfund these benefits or finance them on a pay-as-you-go basis. This just postpones the liabilities to future generations and makes them worse. Moving current public employees into plans with defined contributions, instead of defined benefits, can improve government balance sheets and give employees portable retirement benefits.

Third, government officials need to define their core services and consider ways to shed the rest, perhaps by getting out of certain areas altogether or by contracting with private firms to provide public services on a competitive basis. After all, if a government activity isn't strictly necessary and it's putting taxpayers in debt, it's not really a public service.

A perfect storm is easier to weather when your ship is trim. The key is to act now. Public officials who do that will face tough choices, but they will also be part of the solution — not part of a problem that residents pay them to solve.

Robert Daddow is deputy county executive for Oakland County and an adjunct scholar at the Mackinac Center for Public Policy. 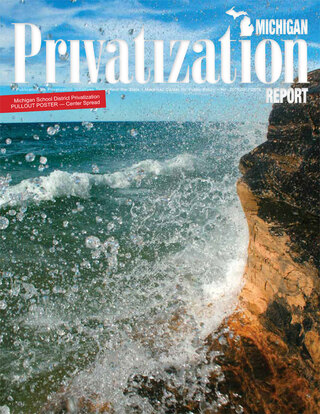