The Rise of Foreign Suppliers

With Internet cigarette sales booming despite the law enforcement campaign against retailers and consumers, the California BOE also targeted package delivery and credit card companies. These companies had sales records California's government could use to identify tax evaders.[205] These forceful tactics did scare some companies, but they may have strengthened the position of foreign online vendors who still felt safely removed from the California crackdown.

Many foreign sites now openly boast about their privacy commitments, promising always to ship cigarettes in plain brown wrappers and never to give tax authorities their records. The federal Jenkins Act requires that mail order or Internet sellers of cigarettes report sales to tax authorities in the state where the order is shipped, but the federal law does not apply to businesses in foreign countries.

In 2003, the sky-high smuggling estimates of the BOE's statistical model were becoming controversial, so a manual check was performed. The BOE surveyed the cigarette inventory of more than 1,300 retailers.[206] They found untaxed cigarettes in more than 25 percent of them.[207] The numbers corroborated the statistical model, confirming the magnitude of the problem.

A second, related problem has also occurred in California: the counterfeiting not just of cigarette tax stamps, but of the cigarettes themselves. On Oct. 1, 2008, news reports out of California indicated that the government had achieved another successful conviction of seven cigarette smugglers. The ring of illicit tobacco traffickers — 13 in all — circulated more than a million packs of cigarettes with counterfeit tax stamps. Some of the packs were reportedly counterfeit cigarettes from China. The gang's operation apparently ran from 2002 into early 2005.[208]

Similarly, in January 2004, the Department of Homeland Security reported that it had confiscated both genuine and counterfeit cigarettes worth more than $37 million in a major smuggling operation that spanned five states and included people from California, New Mexico, Texas, New York and Florida.[209]

The story of Jorge Abraham, one of the smuggling ring's leaders, was recounted in an Oct. 20, 2008, article published by the Center for Public Integrity and entitled "The Guy in the Wheelchair: How an El Paso Smuggler Moved a Half-Billion Cigarettes Across America." The article describes an eclectic group of operators distributing counterfeit cigarettes across the United States.

Abraham's cell wasn't the only one importing counterfeits from China. By 2002, bogus Chinese cigarettes were pouring into the United States, attracting a rogue's gallery of distributors — Chinese smugglers and Russian mobsters joined in, along with Abraham's Mexican-American gang. There was even a ring of Orthodox Jewish smugglers. Abraham's New York buyers — Deland, Snyder, and Farnham — were also moving contraband cigarettes from Simon and Michael Moshel, a pair of pious Jewish brothers from New York City. The Moshels started out selling fruits and vegetables when they immigrated to the United States from Israel. After selling their produce business, they launched a plastic bag manufacturing plant, and then, among other ventures, began importing goods such as jeans, counterfeit batteries, and fake Marlboros.[210]

Graphic 23 shows two packs of Marlboros, one of which is counterfeit and the other of which is produced by the manufacturer. It's not easy to spot the fake. Even Marlboro workers employed to defend their brand's integrity have trouble telling the difference.

The most common difference between the two is apparent only when the product is smoked: The fakes taste bad, and customers frequently call to complain. Counterfeiters clearly spend a great deal of time attempting to exactly copy the look of the cigarette, but they often lace the tobacco with filler, such as sawdust, to reduce production costs.

Graphic 23: A Real and a Counterfeit Pack of Name-Brand Cigarettes 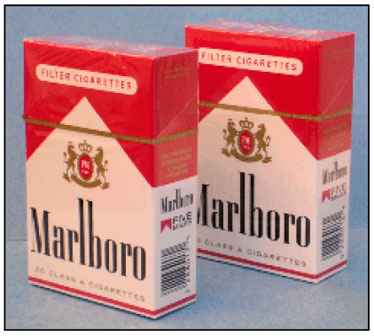 Source: Philip Morris USA. The genuine package is on the left.