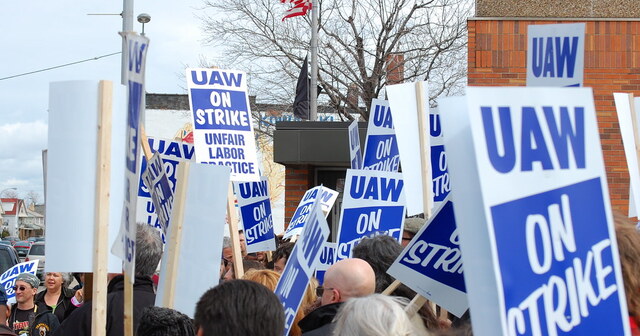 Many people are exercising their right to leave the union

The United Auto Workers is on strike, shutting down plants across Michigan and elsewhere. In the decade since the union last called a strike, four states with a heavy UAW presence – Michigan, Indiana, Wisconsin and Kentucky – have all become right-to-work states.

Union workers in those states cannot be forced to pay dues or fees in order to work. But some labor unions and supporters say this has had little effect on the UAW. The Lansing State Journal reports the right-to-work law is playing only “a small role” in the strike.

"Right to Work probably has a big effect on membership in schools and membership in perhaps, supermarkets and so on," [said Dale Belman, Michigan State University professor of human resources and labor relations]. "It really has just about zero effect on union membership in manufacturing or construction." Auto, construction, warehousing and utility workers are more likely to consider their jobs part of their identities and worth organizing to protect, Belman said.

Michigan has added more than 400,000 jobs since the state went right-to-work in 2013. But the overall number of union members has seen a decline. Michigan’s 14 largest unions, according to federal LM-2 forms, have lost 130,000 members overall.

As the auto industry has recovered from the state and national recession, it has added jobs and UAW’s membership has grown. Since Michigan became a right-to-work state, overall UAW membership has increased by three percent, from 382,513 to 395,703. However, the number of auto workers in the state has increased far more than that – by 28.4% since 2012 (from 136,900 to 175,800).

General Motors notes in the Lansing State Journal article that all employees, union or not, can show up to work throughout the strike. UAW leaders insist that members do not work and forego full wages while they negotiate a collective bargaining agreement. Those union leaders have also been indicted for corruption for using funds meant for training members on their own personal interests. Right-to-work laws mean that members do not have to contribute to such behavior if they disagree. They can opt out at www.UAWOptOut.com.