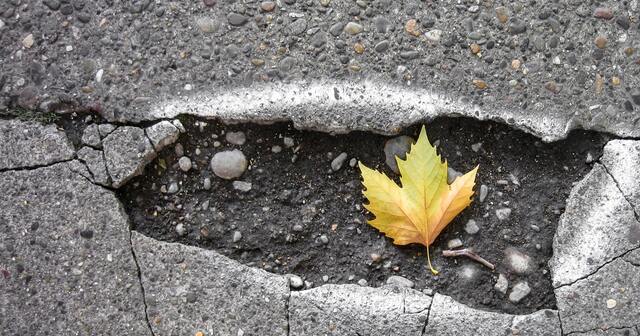 Road conditions have only gotten worse

Michigan is spending more on roads. A lot more. The transportation budget has increased $1.8 billion since 2012, a 32% increase when adjusted for inflation. And yet road conditions have only gotten worse. A broad measure of road quality shows that 66% of roads used to be in good or fair condition in 2012 and 58% are at those levels today.

The measure used here is for federal aid-eligible roads, which officials assess each year. It doesn’t cover all of the roads, but it includes the roads most people drive on when they aren’t driving right around home.

To spend more money on roads only to see them get worse seems like a rip-off.

But the additional taxpayer dollars have done a lot to change the expectations for future road quality. Forecasts used to be dour. Back in 2012, state officials thought road quality was only going down. Roads may have been in better shape at that point, but they were expected to get worse, and quickly. 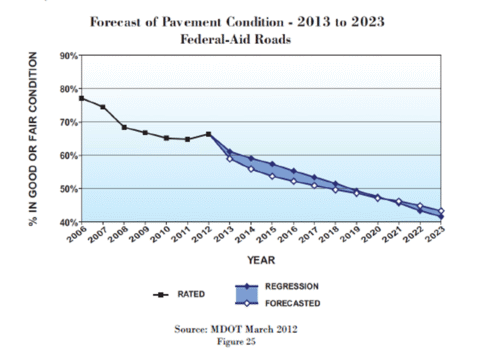 Lawmakers later put more money into the road budget. In addition to enacting fuel and vehicle registration tax increases in 2015, lawmakers found $1.0 billion extra in state money to spend on the transportation budget, and the federal government has given the state $200 million more. With the additional spending, the projections for road conditions improved. The effort has turned around the expected drastic decline in road quality, but things haven’t quite gotten to the point where road quality improves.

While this next chart is complicated, it shows how the forecasts for road quality changed as lawmakers put more into the road budget. Each line shows the forecasts made in a particular year. If the slope of a line levels off, it means that the expected declines stopped and roads will be at roughly replacement levels. 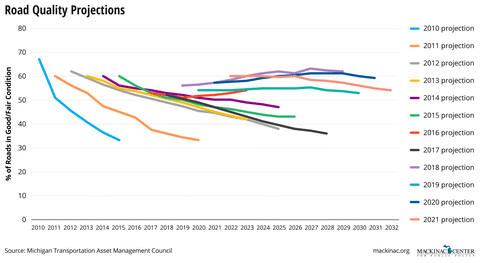 It is unfortunate that the most recent forecast looks worse than the previous one, as forecasters expect declines in road quality again. They report that they are using some more detailed methods to give a more accurate forecast, but they also noted that road costs have gone up, which gives spending less bang for the buck.

But the state also hasn’t increased its spending on roads over the past few years. The dispute between the governor and legislators over whether to increase taxes to increase road spending and other government spending ended with fewer dollars for roads. Lawmakers have additional federal funds they can use on infrastructure, and the state has collected more in taxes than previously expected, so that may change.

Roads are owned by state and local governments, and lawmakers and local officials bear the responsibility to ensure that they remain in good working order. Recent spending increases stemmed the expected decline in road conditions. The state is close to the point where road quality improves.