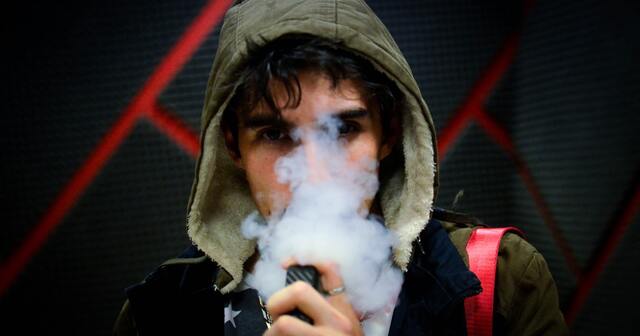 Gov. Gretchen Whitmer has announced that she intends to ban flavored vaping products in Michigan. Her argument is that these products are attractive to children and may get them started on a dangerous habit.

While that may be true, prohibiting flavored vaping products (with or without nicotine) would bring negative consequences that might offset any good she was trying to accomplish. There are better ways to prevent children (and adults) from starting a vaping or smoking habit than an outright ban.

I have had an interest in cross-border smuggling since the early 1990s and have co-authored studies that measure the degree to which combustible cigarettes are smuggled around the nation. The subject is important to the vaping debate for two reasons.

First, a ban on flavored vaping products would likely cause a consumer shift back to more dangerous cigarettes (particularly menthol flavored ones), a portion of which will be smuggled. Second, cigarette smugglers would start smuggling vaping products into the state.

While cigarette smuggling continues to be a major problem — more than 20% of all cigarettes smoked in Michigan in 2017 were smuggled — a shift from vaping to cigarettes probably wouldn’t result in a massive uptick in smuggled smokes. It would, however, have health consequences. Some experts believe vaping is a harm-reduction strategy that some cigarette smokers use to kick the habit.

Smuggling of vaping products would likely become a new profit source for today’s large-scale cigarette smugglers. They’ve already established networks in the state; adding supplies of small, flavored vaping cartridges or liquids to their supply chain would be all too easy. Smuggled smokes are already sold on the street in the form of “loosies” (single cigarettes); flavored vaping products could be passed along, too.

In addition, individuals may just cross over a nearby border into Ohio, Indiana or Wisconsin to pick up flavored vaping products for their own use. That’s very common with cigarettes, and we estimate that more than half of Michigan’s illegal cigarette market is a function of this “casual” smuggling effort.

The smuggling issue should concern lawmakers a great deal because it will not only enrich smugglers, but vaping store owners on the other side of our borders, while simultaneously bankrupting those operating in Michigan. Does law enforcement or any member of the Legislature believe they can keep flavored vaping products out of Michigan when jailers can’t keep contraband cigarettes, heroin or cell phones out of prisons?

There are other parallels with the illicit cigarette smuggling trade and even the actual era of alcohol Prohibition from which opponents of flavored vaping products should draw lessons. They include, but are not limited to, home brews or roll-your-own cigarettes. During Prohibition, people made their own liquor, and it was often very dangerous. Today people roll their own smokes and may leave out filters to get more nicotine bang for their buck. With vaping, the public — including kids — can find do-it-yourself videos on YouTube that teach people how to raise the nicotine hit in their e-juice.

Most of these concerns, by the way, would remain if President Trump’s recently proposed national ban on flavored vaping products is adopted.

While there are many reasons not to adopt a ban on flavored vaping products, there is an argument that hasn’t been mentioned yet: human liberty. Vaping products are made for adults. As we’ve written before in debates over cigarette taxes:

It does not take much imagination, especially after America’s experiment with alcohol prohibition, to see that fighting this impulse could generate an intrusive enforcement regime and a growing disrespect for the law. Intrusiveness and lawlessness would be more than just unpleasant: They could undermine people’s pursuit of happiness. That pursuit may sometimes be erratic and wrongheaded, but it is part of the value and purpose of life. As U.S. Supreme Court Justice George Sutherland once said, “To give a man his life, but deny him his liberty, is to take from him all that makes his life worth living.”

There is a better idea for helping people meet the goal of kicking the smoking or vaping habit, or not starting it in the first place: prevention and cessation programs. Each year, the state wastes $75 million in money it received from its Master Settlement Agreement with tobacco companies, spending it instead on corporate welfare. It should be using this money to persuade people to not start using tobacco or vaping products, or to help them stop.

The Campaign for Tobacco-Free Kids, a Washington, D.C.-based anti-smoking organization, points out that nationwide, states only spend about 2.4% of the money they receive in Master Settlement Agreement dollars on tobacco prevention and cessation. Michigan is 45th in this category.

The vaping ban proposed by the governor is a bad idea, particularly if it becomes a permanent fixture. It will increase lawlessness and deny cigarette smokers a solid alternative to reduce the harm of combustible smokes.