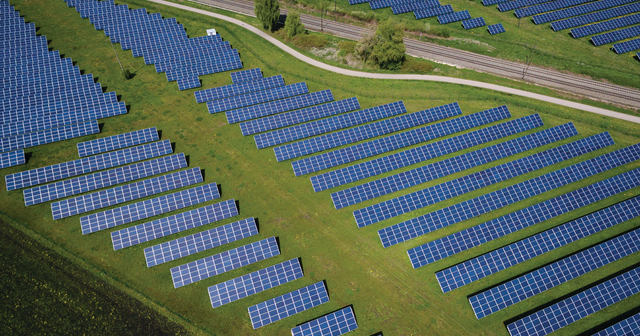 Michigan’s monopoly utilities, DTE and Consumers Energy, say that environmental sustainability is one of their key emphases. As evidence, they cite their push to close coal plants and massively expand their industrial solar generation facilities. Despite their claimed interest in environmental responsibility, however, neither utility has prepared end-of-life plans for their solar facilities. This means they don’t know yet how they will recycle or dispose of their solar arrays when they reach the end of their useful life. The failure to make sound plans will leave an unknown burden for future landowners, utility customers, taxpayers and the environment.

DTE’s environmental policy statement emphasizes the company’s green objectives in several places. Two stand out. One objective is to “make environmental concerns an integral part of our planning and decision making processes and commit resources to implement the environmental programs subscribed to by the company.” A second is to “continually strive to minimize, mitigate or restore adverse environmental impacts caused by our operations.”

Consumers Energy has similar goals. First, it says it will “protect the natural environment from potential harm and degradation as we understand and reduce, where practical, the environmental impacts of our activities.” It also pledges to “establish environmental objectives compatible with the strategic direction of our company.”

Both companies clearly value environmental protection and have selected solar energy as a tool to advance that goal. Given these priorities, one would expect both companies to have a plan to minimize the environmental impacts caused by their planned solar facilities.

But emails from both DTE and Consumers Energy confirm that neither utility has developed detailed policies for decommissioning or recycling solar facilities when they must be retired. Unfortunately, this situation is not unique to Michigan, or even the U.S. For example, Japan’s Environment Ministry has sounded an alarm about this challenge. Media reports warn that the “mountain of waste” that comes with the growing number of industrial solar installations in Japan will lead to serious, long-term problem for utilities and government managers.

A 2017 report from the nonprofit group Environmental Progress agrees, noting that “solar panels create 300 times more toxic waste per unit of energy than do nuclear power plants.” The report lists a few of the toxic chemicals and heavy metals used in solar panels, such as chromium, cadmium and lead. It warns that these items “are known to leach out of existing e-waste dumps” into local water sources. Environmental Progress also describes the costs and technical difficulties of recycling these compounds. Often, they are disposed of or shipped out of the country as electronic waste. Unfortunately, this path means that North America’s strict environmental regulations no longer apply, and it is not always clear how the waste is disposed of.

The waste problem is compounded by the fact that solar power is a relatively ineffective energy resource in Michigan. According to the National Renewable Energy Laboratory, Michigan’s geographic location means it receives some of the lowest levels of solar irradiance in the country. But the waste from solar plants will be the same, no matter where the facilities are located or how effective they are. In other words, if the regional monopoly utilities do not create decommissioning plans, Michigan’s environment will be put at risk in the name of producing energy with a growing number of relatively inefficient solar facilities.

The average life of a solar panel is only 25 years. To be fair, this still leaves time for DTE and Consumers Energy to develop a decommissioning policy before the planned panels end their useful life. But it is surprising that utilities with such a dogged focus on making “environmental concerns an integral part of [their] planning and decision making processes” have not planned for the potential environmental impacts of their renewable energy goals. While their emails do indicate an intention to address long-term disposal issues, utility customers — meaning you and me — are still left wondering how much it will cost.

Federal tax incentives and direct subsidies, along with state laws mandating renewable energy, make solar facilities appear to be the most desirable option for generating electricity. There’s little doubt that DTE and Consumers Energy will reap substantial short-term economic and public relations benefits from building more of them. But, by their own admission, the utilities are not accounting for the inevitable long-term costs associated with these facilities. DTE and Consumers Energy need to clearly lay out their plans for properly disposing of their renewable energy facilities so Michigan residents can begin to plan for the costs.