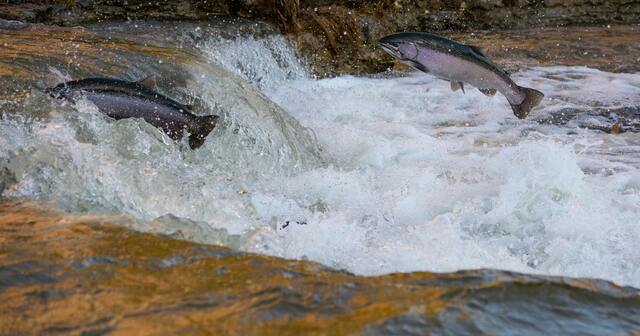 The Great Lakes’ Reliance on Salmon is Changing

Great lakes salmon have been a staple of Michigan sport and recreational fishing for over 50 years. Originally introduced by the state’s Department of Natural Resources to curb the problem of an exploding alewife population, salmon have lived comfortably in the Great Lakes ever since the early 1970s. But that level of comfort now appears to be in a state of flux, and decreasing salmon stocks could mean the state needs other options.

Ecosystems are constantly changing, driven by both external and internal factors. Human activities and management decisions, the introduction and proliferation of invasive species, changes in plant species, and countless other factors all determine how an ecosystem develops and the organisms in them thrive. Salmon are no exception to this rule and, since their entry to the Great Lakes, they too have experienced significant changes.

The state introduced salmon as a way to curb an explosion of alewife, an invasive species of herring that probably was introduced to the Great Lakes in the late 19th and early 20th centuries. On that point, the salmon appear to have been wildly successful. The number of alewives in the lakes has decreased substantially over the past several decades. 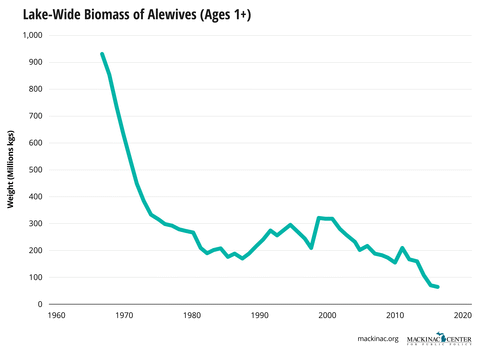 In response to this decline, and other factors, the DNR has drastically cut back on stocking chinook, which have been described as the cornerstone of the state’s salmon stocking efforts, as well as other varieties of salmon. 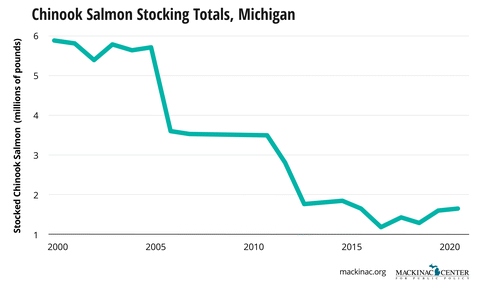 With DNR stocking efforts shifting, the lake fisheries and ecosystems are changing as well. Salmon are not native to the lakes, and they have largely accomplished the tasks for which they were introduced. So, what should be the next steps for salmon here?

The DNR manages its stocking work by, among other things, looking at ratio of predators to prey. These predator-prey ratios are relatively simple measurements that approximate how much biomass a predator species has (in brief, its volume) compared to the biomass of a prey species. The DNR has established as its goal a ratio of 0.05 for chinook salmon in Lake Michigan (i.e., 5 pounds of chinook salmon for every 100 pounds of alewife). But in recent years — as the alewife population has decreased — the PPR has risen above 0.10, prompting the DNR to decrease stocking as it aims to bring the ratio back to 0.05. This decrease in stocking numbers will inevitably decrease salmon harvests by Michigan’s sport and commercial fisheries. These decreases are likely to decrease overall access to salmon as a food source for Michigan residents. 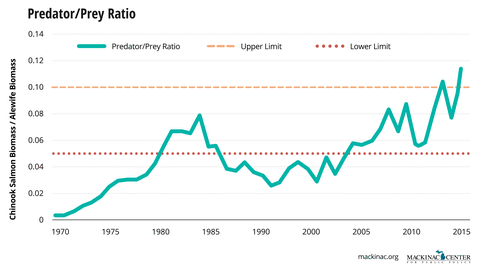 One market-based option that could help to alleviate this impact is the appearance of AquAdvantage salmon, produced by Aquabounty. These salmon are the first of their kind: farm-grown Atlantic salmon, with two genetic modifications that allow them to grow faster — which means they can come to the table faster — than their wild cousins.

Produced and sold commercially, AquAdvantage salmon are reared in controlled, land-based facilities that minimize any risk of the farmed fish escaping into the wild. Despite these strict controls on their production, there has been significant pushback by some groups that call them “frankenfish.” They claim the fish are unsafe and say shouldn’t be approved for human consumption.

This resistance to genetically modified food isn’t new, but it is now, thankfully, being dispelled by improved scientific understanding. Even The New York Times, a long-time critic of genetic engineering, has now recognized the value of GMO foods. GMO crops have massively increased our ability to feed more people while using fewer resources, a key aspect of reducing humans’ environmental impact while still meeting their needs.

Just as GMO crops provide benefits unobtainable by wild stocks or traditional farming methods, so can GMO animal products such as Aquadvantage. We shouldn’t push back against such a promising scientific progress; we should carefully encourage it.

As concerns about changing fish stocks, or overfishing are being expressed worldwide — in both fresh water and the ocean fisheries — markets continue to offer innovative solutions, providing much-needed foods while also reducing the environmental impacts of those food choices. Plant-based alternatives, similar in concept to the impossible burger, are now creating new seafood options.

Market innovations like these are an essential part of meeting human needs while mitigating environmental problems, such as changing stocking priorities of government agencies and concerns over shrinking wild stocks of some fish species. Both entrepreneurs and environmentalists should embrace these products as they are proposed and brought to market. After all, they have the potential to provide abundant, affordable and safe food while helping to lessen the impact of a declining salmon fishery in Michigan and around the world.