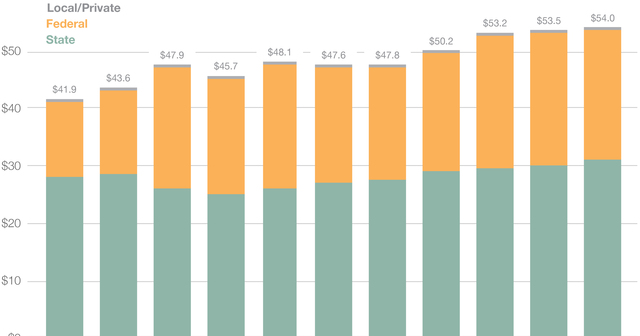 Lawmakers can afford to lower taxes

Michigan’s 2007 income tax hike has cost the typical Michigan household about $1,000. This is the total cost over the decade, and while it might not sound like much to some people, it is a significant sum to others.

But the size of this tax hike is not the problem. The real issue is that lawmakers are taking more from Michigan residents without needing to. Thankfully, some legislators are working to try to let people keep more of their own money.

However, the tax dollars didn’t come in as planned. The economy has a large impact on tax trends. Total income tax revenue actually fell from $7.2 billion in fiscal year 2007-2008 to $5.9 billion in fiscal year 2008-2009. The tax increases probably meant more revenue for the state than would otherwise have been the case. But the hike also punishes people for earning more, so this effect may also explain why there were fewer dollars generated by the tax after increasing its rate.

The tax hike was sold as a temporary increase, and the legislation included reducing the rate back to 3.9 percent over time. However, as part of Governor Snyder’s 2011 tax reforms, the planned rate declines were halted and the current rate is 4.25 percent.

House Republicans held a vote on a bill that would have lowered the rate back to 3.9 percent over the next few years. Unfortunately, they were not able to garner enough votes to pass it, with 12 Republican legislators voting against it and one Democratic house member supporting it.

The state can afford this reduction. With Michigan’s recent economic growth, the income tax is collecting more from taxpayers. The state received $9.4 billion from this tax in fiscal year 2015-2016, up $3.5 billion since 2009. The state budget is expected to grow another $777 million this year, and the reductions rejected by lawmakers would only have reduced this amount by $195 million.

Over the longer term the modest decline in the tax rate would still leave the state government with more revenue. Annual state revenues are expected to increase by $1.7 billion over the next four years, well above the cost to the state budget for allowing people to keep more of their money. Thus, even if the Legislature lowers the income tax, the state will continue to increase its budget.

Many lawmakers promised they would lower the income tax, both back when it was increased in 2007 and on the campaign trail. Let’s hope they agree to get this done before the state takes more of people’s money unnecessarily.