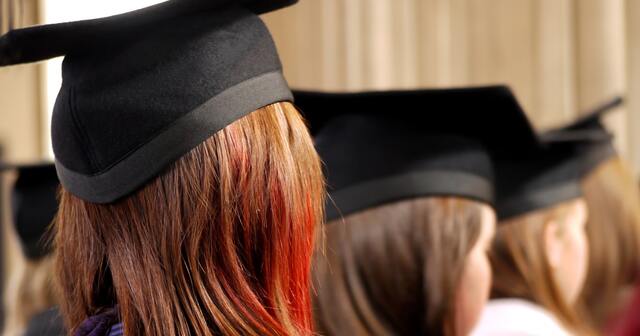 Schools That Beat the Odds Beyond Graduation

Parents considering different high school options might look at a host of criteria to determine how well the school will help their teenager succeed. Graduation rates, standardized test scores and college enrollment rates all might make the list.

Still, individual metrics of school performance can be somewhat misleading on their face. Those metrics may better reflect other factors, particularly students’ socioeconomic status, rather than the quality of the school itself.

The Mackinac Center’s series of Context and Performance Report Cards have substantiated the well-known phenomenon that schools with poorer student populations tend to score lower on standardized tests. The connection can be clearly seen in comparing the rates of Michigan schools’ achievement rates on recent SAT and M-STEP tests with the shares of students receiving free lunch subsidies due to family poverty.

Lower-income schools also tend to see fewer of their students attend college, at either two- or four-year institutions:

This is where the Mackinac Center’s CAP Scores can be useful. The scores represent a very simple method of judging the relative quality of education at a school. It essentially asks: given the economic status of the students taking the standardized test, what should we expect those results to look like? A school that perfectly meets the expectation receives a score of 100. A score above 100 means it exceeds expectations, while one below 100 means it falls short.

If CAP Scores are helpful in gauging how well a school prepares its students for opportunities after high school, higher CAP Scores should also be associated with more students enrolling in college. That is indeed what we see: 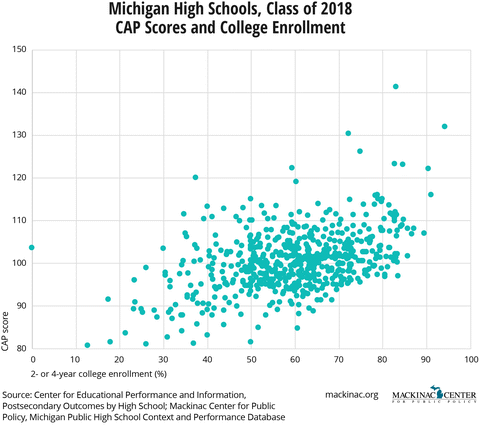 One final point of interest is that higher CAP Scores correlate positively with college enrollment even when considering low-income students on their own. The average school in Michigan sends economically disadvantaged students to college at a rate of approximately 50%. This drops to only 39% for high schools with less than a 93 CAP Score, but jumps to 61% those with a score of 107 or higher.

In other words, higher CAP Scores not only help parents find schools overcoming the odds on standardized achievement tests, they also indicate schools that do better equipping students for college, regardless of that student’s economic background.