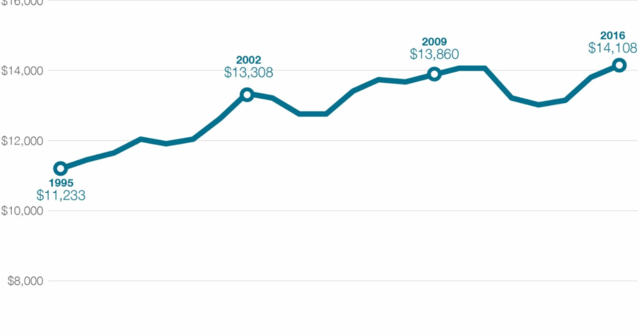 Backers of a proposed follow-up report have shied away from definitively saying schools need additional funds to improve. Small Business Association of Michigan CEO Rob Fowler was quoted in MLive earlier this year: “I don't know that more money is the answer. It could be that if we spent the resources we have today differently, that we would do a much better job of educating across the board.”

A look at the latest overall education funding picture suggests this cautious statement is well-informed, even if the typical Michigan resident has little idea how much schools already are spending. When looking at all sources of income, state figures for 2016 show that public schools brought in $14,108 for each student enrolled, the highest ever.

Even after adjusting for changing dollar values, that per-pupil revenue figure surpasses the previous high of 2010. This chart shows that schools experienced their biggest funding boost between 1995 and 2002. After falling from the previous high, real per- pupil revenues have increased the last three years running.

Data for total revenues are complete through 2016, and don’t take into account dollars collected or spent this year. It’s likely that the line will go up for 2017, as well.

Lansing’s fiscal analysts now estimate that the state’s School Aid Fund will take in $153 million more this year than they projected just four months ago. The forecast for next year’s fund revenues is nearly $13 billion, up $189 million from the January projection and more than $800 million greater than the 2016 total. For the average district, 96 percent or more of state tax dollars comes from the School Aid Fund.

Local property taxes also remain a sizable part of the K-12 funding picture. Some local school districts are starting to raise more funds from one type of property tax, the regional enhancement millage, which pools and redistributes money across several school districts. Voters in two of the state’s largest intermediate school districts recently approved increases. Wayne County taxpayers are on the hook for another $80 million after last November’s election, while Kent County passed a $20 million measure earlier this month.

It’s time to put to rest the myth that Michigan schools are starving for lack of funds and have serious policy conversations about how to use current dollars more effectively.