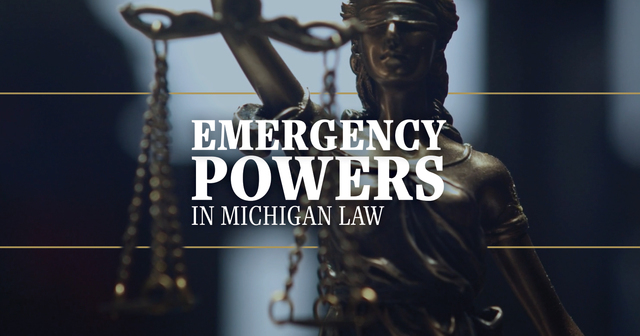 MIDLAND, Mich. — Few Michiganders could have imagined the impact Gov. Gretchen Whitmer’s COVID-19 emergency orders would have on their daily lives and livelihoods. While the governor’s unchecked emergency authority was eventually struck down, there are still laws on the books that could similarly be misused. A new study from the Mackinac Center for Public Policy analyzes every emergency power in state law and identifies reforms that would safeguard the public from their abuse.

Emergency powers can be helpful when swift action is necessary, but ill-defined or indefinite powers can open the door for abuse. There is no better example than Gov. Whitmer’s exercise of unilateral authority during the COVID-19 pandemic. She used a broadly worded statute from 1945 designed for handling urban riots to justify shutting down businesses, closing schools and regulating virtually every public interaction. She also ignored, in a different law she relied on, a requirement to get legislative approval to extend her emergency powers.

In response to a Mackinac Center lawsuit, the Michigan Supreme Court struck down the 1945 law, declaring it unconstitutional. In its decision, the Court found that laws granting the executive branch broad emergency powers must include strict and clear controls on how that power may be used.

To help prevent future abuse, the study identifies four constraints that all emergency power laws should include.

The study also explains the emergency authority granted to state departments through the Administrative Procedures Act. This statute may be the most misused. It allows state officials to unilaterally issue “emergency rules” that can last up to a year. The report looks at the historic use of these emergency rules and finds evidence that they have been used for reasons that have little to do with actual threats to public health or safety.

Michael Van Beek, author of the study and director of research for the Mackinac Center, found that there were more than 30 different emergency power laws still on the books. These address a variety of potential threats, including radiation from mammography machines, the impact of mining on the environment, the financial health of insurance companies, and the management of invasive species.

“Many of these laws could be improved by simply adding the missing constraint to the law, such as a durational limit or procedural requirements,” said Van Beek. “Other emergency powers are antiquated or duplicative and could easily be repealed, without impacting the government’s ability to deal with future emergencies.”

Many of these common-sense changes were addressed in a 31-bill package that was passed this fall by the Michigan Legislature. Eight bills were approved by the Legislature but eventually vetoed by Gov. Whitmer.