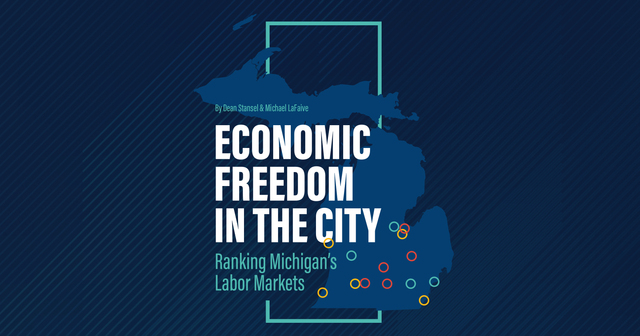 Midland ranks highest out of 14 metropolitan areas across the state

MIDLAND, Mich. — Most Michigan cities rank below the national average in a new index of economic freedom, but there are some bright spots. Midland received the state’s highest overall freedom score, while Ann Arbor and Grand Rapids-Wyoming also performed well.

These are some of the findings in the study “Economic Freedom in the City: Ranking Michigan’s Labor Markets,” released today by the Mackinac Center for Public Policy. The study grades metropolitan areas on how they performed across three major policy areas: labor market regulations, taxes and government spending.

Using data from 2017, the study looks at the nation’s 383 Metropolitan Statistical Areas and ranks them according to their level of economic freedom. Nationally, Florida came out on top, with eight of the top 10 scores.

Michigan had less stellar results. Midland was the state’s top performer and the only metropolitan area that scored above the national average, with an overall economic freedom score of a 6.76 out of 10. Ann Arbor was second at 6.66 and Grand Rapids-Wyoming was third with a score of 6.56. Bay City, Flint and Battle Creek were the worst performers among the state’s 14 metropolitan statistical areas.

“Economic freedom can vary widely from nation to nation and from state to state, but it can also vary across local economies within states and across the country,” said study co-author Dean Stansel, a research associate professor at the Bridwell Institute for Economic Freedom and adjunct scholar with the Mackinac Center. “Academic scholars have produced hundreds of papers using similar national and state-level indexes, finding generally that greater economic freedom is associated with better outcomes on a wide variety of measures. This newer index for metropolitan statistical areas has allowed that research to be expanded to the local level as well.”

The study demonstrates strong correlations between greater freedom and economic well-being. It overwhelmingly finds positive connections between economic liberty and outcomes such as lower unemployment rates, higher employment and population growth. In addition to the broader measures of taxes, government regulations and spending, the study looks at more detailed statistics, including minimum wage burdens, bureaucracy size and union influence.

“If lawmakers want to attract talent and keep people in the state, it is critical to pass policies that benefit individuals and businesses,” said Michael LaFaive, senior director of fiscal policy at the Mackinac Center for Public Policy and co-author of the study. “Reducing unnecessary regulations and limiting tax burdens are just a few of the steps that local and state policymakers can take to give individuals access to greater economic prosperity.”

See where your metropolitan ranks here.