Insurance 52% to 119% Costlier Under Obamacare

The Manhattan Institute has just released an interactive map comparing on a county-by-county basis the least expensive individual health insurance policies available before and after the federal health care law went into effect.

To make the analysis more fair, the earlier rates are adjusted to reflect higher prices paid by individuals with pre-existing conditions (the methodology is explained here). These are then compared to the lowest rates currently available on the federal exchange.

Those changes vary widely by county, however. Here is a sample: 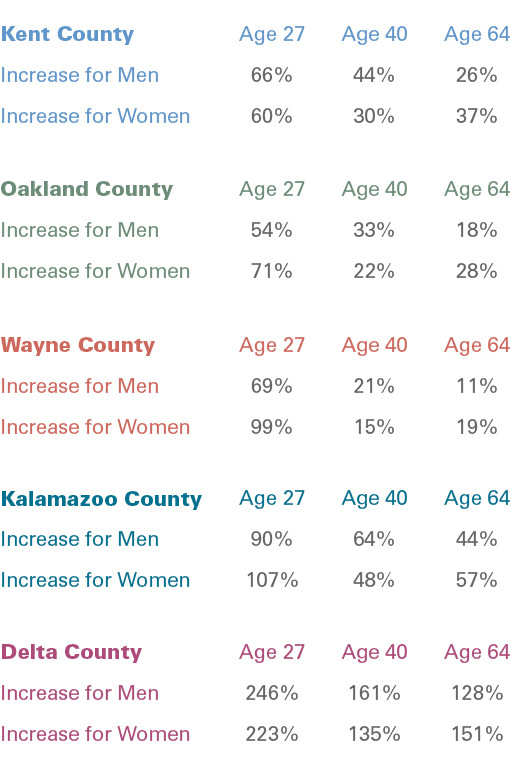 These are the rates of the underlying insurance policies. Individuals in households with incomes up to 400 percent of the federal poverty rate are eligible for the law's sliding-scale subsidies. However, even with subsidies it appears many or most households are paying more. The map's website also provides the statewide average income level at which insurance costs for representative households exceed the pre-Obamacare rates even when subsidies are included.

For example, the break-even point for a 40-year-old man in a household of three is a family income of $37,226. Above that level, insurance costs are higher even with an Obamacare subsidy. Statewide, the median income level for such households is $61,700. In other words, far more households of this size may be paying more under the new law than are benefitting from it. In many, if not all parts of the state, this is certainly the case.

For women age 27 in a household with three people, the statewide break-even point is $32,262. The median income level for such households is $37,100 in Michigan.

On a statewide basis both men and women age 64 at the median income for this group appear to be net winners under the law. With subsidies, their insurance costs are the same or less under the new law as before it went into effect. In many counties that may not be the case, however.

According to recent press reports, Michigan rates are about to increase even more. Blue Cross Blue Shield, which controls more than 70 percent of the market for those who buy their own insurance rather than getting it from an employer, says these rates will increase more than 9 percent in 2015. (According to one analysis, the really big increases will happen in 2017.)

Barring another extra-legal administrative fiat further suspending enforcement of Obamacare's employer mandate, the number of individuals affected by these individual rates may expand as the mandate phases-in in 2015 and 2016. That's because the law's penalty for employers who don't provide insurance is considerably less than the cost of providing it, creating an incentive to drop insurance and let employees find their own coverage on the federal exchange.