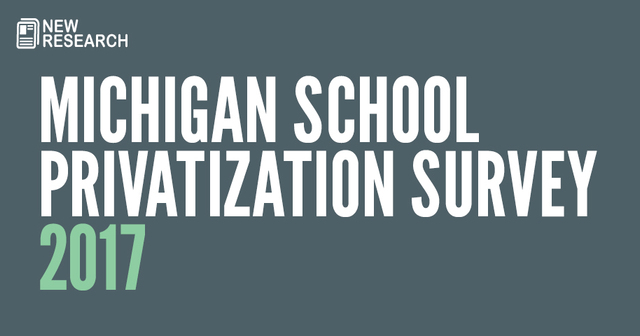 Midland — In 2017, 71.5 percent of Michigan’s school districts used private companies to provide custodial, transportation or food services, according to a new report from the Mackinac Center for Public Policy.

The Michigan School Privatization Survey 2017 is the 15th edition of the annual report. It shows how outsourcing support services has grown from a rarity into a common practice for school districts. The survey was first conducted in 2001, when only 31 percent of districts contracted with private companies to provide custodial, transportation or food services.

Districts outsource for two main reasons: Some feel a company that specializes in a service will provide a higher quality product; some view it as a way to save money. For many districts, it’s both. The survey showed that nearly 95 percent of districts were satisfied with their outsourced services.

“The cost savings for a district considering privatization can be huge, sometimes hundreds of thousands of dollars,” said James Hohman, director of fiscal policy at the Mackinac Center and co-author of the study.

The number of schools contracting for custodial work has grown the fastest since 2001, when only 6.6 percent outsourced that service. Now 52.6 percent do. Transportation has also seen substantial growth, at 26.1 percent this year, up from just 3.9 percent in 2001.

Food service was the most commonly outsourced service in 2001, at 27.3 percent of districts, but has seen more moderate growth in recent years. Between 2016 and 2017, there was no change in the number of districts with contracts for food service — it remains at 43.3 percent.

Although some districts bring services back in house for various reasons, the trend toward outsourcing continues, as 15 years of survey data shows.