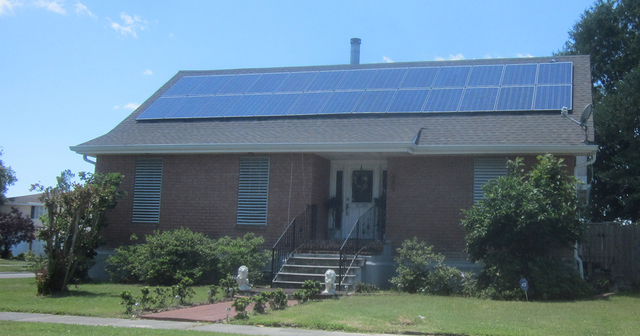 No More Additional Favors for Solar

Property taxes should tax the value of property, including solar panels

It’s a good thing when people who are concerned about their ecological footprint spend their own money to install solar panels on their homes. It’s a bad thing when politicians attempt to exempt these decisions from normal tax policy.

The property tax is the largest tax in the state, raising $14 billion. Tax collections are distributed to the state and to local governments, schools and other taxing authorities. But there is a bill in the Michigan Legislature that would exempt small-scale solar panels on residential property from property taxes. Some advocates are calling for even more tax preferences for solar panels.

The property tax is based on the value of property. If solar panels make a home more attractive on the real estate market, its tax levy should reflect that.

Taxpayers have a constitutional protection that keeps their property tax burden from increasing above inflation due to market gains. But adding to your house by installing solar panels adjusts that base.

Lawmakers have thus far resisted using property tax exemptions to give favors to certain industries. That hasn’t been the case for other taxes. People who trade in their cars, for instance, only have to pay sales taxes on the difference in value between the car they buy and the car they traded in instead of the whole value the purchased vehicle. This privilege was lobbied for by car dealers around the state.

State politicians should resist using the tax code to hand out favors. Taxes with a broad base and a low rate raise more revenue with less negative impact on the economy. Those bases get narrowed when lawmakers use tax policy to grant favors.

Besides, the solar industry already enjoys too many favors. Solar panel manufacturers have been awarded government subsidies. Installing solar panels gets homeowners income tax credits. And selling energy from home solar arrays on the electric grid earns homeowners retail market prices (though this favor may soon be on its way out). Each of these favors are in addition to the state mandate that requires 15 percent of electricity to come from renewable sources like wind and solar by 2021.

Assigning a value to solar panels for taxation purposes can be a bit tricky because there aren’t that many homes with solar panels. Additionally, in some areas, adding solar panels may be more of a liability than an asset since there are upkeep costs that may scare away potential buyers. One real estate agent equated it to trying to sell a home with a swimming pool — not everyone will pay extra for it.

Despite the challenge, there is a simple cost-benefit analysis that can be done to better understand the proposed property tax exemption. If the goal is to produce more renewable energy, then the cost of the exemption can be compared to the benefits of solar production.

According to Mlive, Ann Arbor has a rule that increases a home’s market value by $1,100 per kilowatt of installed solar, calculated off city tax rates. Therefore, an 18-panel rooftop array, which produces approximately six megawatt hours of electricity annually, would increase the taxable value of a home by $5,300. That means that exempting solar panels would be a favor that costs state and local governments $176 in annual property taxes. That favor would cost less in places without a strong market for homes with solar panels.

The cost of this favor can be compared to the cost of a renewable energy credit on the open market, where six megawatt hours’ worth of credits may cost up to $150 per year or as little as $48 per year. Thus, it costs more to exempt solar than it does to buy renewable energy credits, though this may change depending on the market and local property tax rates.

It gets worse for the cost-benefit calculation. The benefits of increased solar energy use would only come from those people who choose to install solar panel as a means of obtaining the new solar panel exemption. That would be those who needed an extra $176 in incentives to choose a solar array. Meanwhile, the costs to the system would be generated by everyone with a solar panel array. This magnifies the costs and limits the benefits of an already shaky cost-benefit calculation.

If the goal is to generate more renewable energy, it is more effective to enter the market for renewable energy credits than to give tax exemptions for household solar arrays.

There are already subsidies at every step of the process needed to install solar. Lawmakers should re-examine the favors already extended to this power source instead of looking at new ways to expand them.