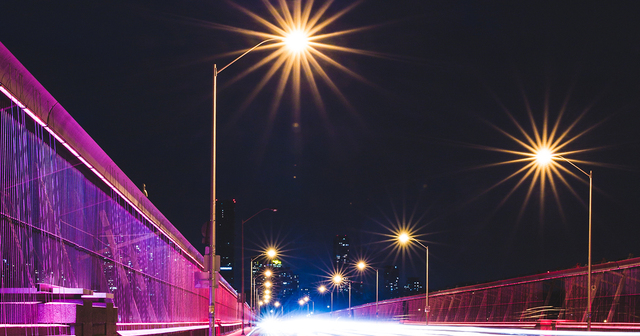 No Government? No Problem

In 2011, DTE Energy sent a fleet of flatbed trucks into the residential areas of Highland Park to pull out the street lights.

It was a dark time for Highland Park – literally. The city, a small, poor community just north of Detroit, had run up a street lighting tab that it couldn’t afford to pay. It struck a deal with DTE allowing the utility to take back the lights in exchange for debt forgiveness.

Residents said that coming home from work to dark streets and alleys was demoralizing.

Not long after, a group called Soulardarity decided to crowdfund some money to purchase and install a single solar-powered street light as a demonstration project. The group’s founder says that solar lights are more affordable and reliable than ever – available even during power outages.

The first light went up in 2012. Public interest in the project started to grow, and activists were able to install a few more lights the following years. Soulardarity hatched a plan to light all Highland Park’s streets using solar, but couldn’t get the city on board.

Residents favored the plan but weren’t willing to wait on the city. With help from Soulardarity, they pooled resources and partnered with a local manufacturer to buy solar street lights at bulk prices. As of 2015, 53 solar street lights had been installed around Highland Park homes and businesses, with help from the city to ensure that the installations were safe and legal.

Now, people in Highland Park say, the neighborhoods have restored a sense of community and security, all while benefitting the earth. Soulardarity is working on another bulk purchase of 100 lights.

This story is a textbook example of “civil society” at work. Civil society provides social goods by relying on voluntary institutions like networks of neighbors or private community groups. The solutions provided by civil society are created by the people closest to the problem, rather imposed by bureaucracies that shuffle tax dollars and design programs that may never deliver solutions at all.

That failure to deliver is the story of what happened with transit in Detroit. After spending years talking about the M1 light rail and millions of dollars planning it, lawmakers cancelled the project. The train would have connected Downtown to the rest of the Woodward corridor, something that entrepreneur Andy Didorosi had hoped would bring about “the new era of Detroit.” When he saw that the project had been declared dead, he said he was furious.

He channeled that anger into something productive: a private transportation business called the Detroit Bus Company. He initially intended to only operate one bus as a demonstration project on behalf of Detroit residents. But the company grew quickly, and its innovations even spurred the Detroit Department of Transportation to make improvements to its own service.

Now the Detroit Bus Company fills gaps in the city’s bus service and uses its profits from paid city tours to give free rides kids so they can get to after-school enrichment programs.

Didorosi’s solution is a win-win for Detroiters, but the outrageously expensive light-rail program would have burdened city residents in a plethora of ways. Now they enjoy freedom from debt and a new transit option that supports the community in ways that a government-operated train could never have accomplished.