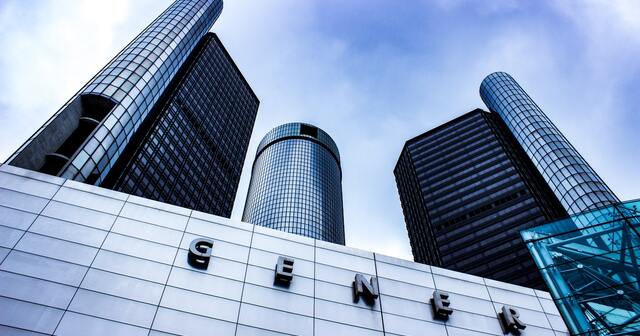 It’s hard to underestimate how much motor vehicle manufacturing formed Michigan’s economy and how ingrained it is in the state culture. But its economic importance has diminished, and it’s easy to not appreciate the extent to which the state has diversified.

Employment in automobile parts manufacturing and assembly peaked in 2000 after steady growth through the 1990s. From 2000 to 2009, manufacturers cut two-thirds of all auto jobs. Despite a recovery since then, employment in autos is only 55% of what it was at its peak.

Declines in both employment and wages mean that auto manufacturing used to account for over 10% of all wages in the state in 2001 but less than 6% now. (Note that these figures do not include payments for additional benefits like medical insurance or pensions.) 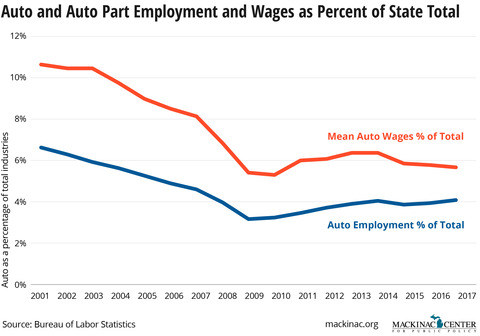 It’s not that Michigan is producing fewer vehicles; it’s that fewer people make cars. By one measurement, Michigan vehicle production is nearly the same as it was 20 years ago. The total value of the motor vehicle and parts manufacturing industry is 7.2% of state gross domestic product, or the value of all of the goods made and services provided in the state. That’s only a slight decline from 7.4%, where it stood in 2000.

Yet this 7.2 percent still represents a huge decline from how much auto manufacturing contributed to the state in the more distant past. In 1965, a full quarter of Michigan production was from motor vehicles and related equipment, though the classification systems then were a little different from the current one, which means the figures aren’t strictly comparable.

And when it comes to production, real estate industries produced more, and spending by state and local governments (which includes local school districts) mattered more than motor vehicle manufacturing in 2000, and they continue to do so. And in 2008, health care surpassed auto manufacturing in its economic value. Wholesale traders may surpass auto manufacturing soon enough.

Taken as a whole, a group of services called “professional and business services,” which encompasses a lot of supporting professions from legal offices, accountancies and temp companies, produces more than the auto manufacturing industry. 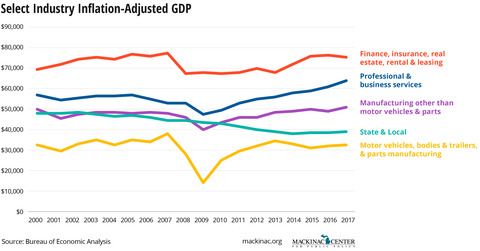 Of course, all industries are connected to others, and some have more connections than others. Auto workers go to the hospital and buy real estate, and real estate agents and doctors buy cars and trucks.

And that’s the point. Fewer people are engaged in auto manufacturing. There is a constant turnover in the economy as companies open, expand, contract and close, and hire and shed workers. But as this dynamic process happens, myriad companies and industries have hired workers, replacing a lot of the jobs that used to be in the auto industry.

Although politicians have paid lip service to the importance of diversification, state policy has actually subsidized auto manufacturing at the expense of other industries. Despite this, the state’s economy has diversified, and nobody devised a grand plan to make it happen. There was no state decree for it. Michigan has done a lot to recover from the 2000s. The auto industry has been part of the recovery. But it means less to the state than it once did.