Michigan Charters Get More Bang for the Buck 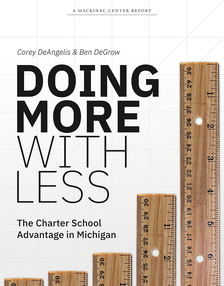 Critics of Michigan’s public charter schools often rely on faulty comparisons. But a careful analysis of what happens to charter students, both during and beyond their academic careers, shows the value of these schools. Simply put, they get more bang for the buck.

The state’s charter schools are accustomed to being disparaged by people who use shoddy information. Some of these criticisms originate from well-meaning groups trying to increase accountability for all schools.

The Education Trust-Midwest forwarded the argument that most Michigan charters perform below the state average in raw achievement scores. The highly misleading argument has been picked up by those with political axes to grind — everyone from The New York Times to U.S. senators opposed to Secretary of Education Betsy DeVos.

We estimate that for every dollar spent in a student’s academic career, attending a typical charter school will lead to 36 percent higher earnings.

The problem with the comparison is that a large share of Michigan charters are located in urban areas with more poverty. Students from these areas tend to start out behind their wealthier peers and bring more daily challenges into the classroom. Seven in 10 of the state’s charter students are low-income, compared with 42 percent in conventional districts.

Comparing students of similar demographics yields a different picture than using mere raw scores. Charters have to take the same state tests and abide by most of the same regulations as other public schools. They also can’t pick and choose their students, contrary to a common misconception. CREDO, a research arm of Stanford University, has consistently found that attending a charter school, on average, adds two to three months of learning each year.

In analyzing state testing data, the Mackinac Center’s annual Context and Performance report card takes into account student poverty to generate a score that adjusts results based on statistical expectations. Charter schools disproportionately finish with some of the state’s highest CAP Scores, but on the whole, they tend to do about the same as their conventional school counterparts.

Charter schools depend on families that actively seek them out, while conventional schools serve as the default option for students within their defined geographic area. That area gives them access to a local tax base from which, at least for now, Michigan charters cannot draw. The net result is substantially less funding per student for charter schools, an inequitable situation that is common across the country.

Given that charter schools receive less money but also have a higher percentage of low-income students among their charges, their academic results are impressive. I teamed up with Corey DeAngelis of the Cato Institute to take a closer look at 92 Michigan cities with charter schools. In these cities, local districts receive an extra $2,782 for each student compared with their charter competitors. Getting equivalent or better results with less money is a laudable outcome and reflects favorably on charters, something we were able to put in more tangible terms.

Our report adapts formulas first used in a University of Arkansas national study to compare how effectively charters and conventional districts spend their resources. Measuring CAP Score points achieved for every $1,000 of per-pupil spending, we found charter schools, on average, to be 32 percent more cost-effective than their neighboring districts. In 90 percent of the 71 Michigan cities with the necessary data, charters were more cost-effective.

Academic gains measured by state tests typically translate to longer-term advantages in attainment and earnings, as students transition to adulthood and career. Our new report also borrows from an established formula that projects the value of education funding into what students later earn. We estimate that for every dollar spent in a student’s academic career, attending a typical charter school will lead to 36 percent higher earnings.

The return-on-investment results are even more dramatic in Detroit, the state’s largest city and the city with the most charter schools. There, each dollar spent by a charter will more than double a student’s future financial output, compared to a dollar spent by a district school. This is not only because students in Detroit charters learn more but also because their schools receive only three dollars per student for every five the district receives.

Michigan charter schools still have a way to go to fully close the gap facing low-income students. But a careful comparison shows that investing in charter options offers greater confidence of success.