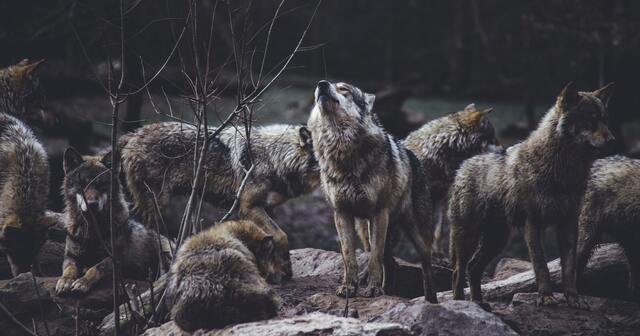 Is it time to reinstate a hunt?

Few issues can provoke as intense or immediate passion as removing protections for an animal under the Endangered Species Act — also known as delisting — or the conservation of charismatic megafauna — large, easily recognizable plant or animal species. The decision to delist Michigan’s gray wolf population, and to transfer their management back into the hands of the states, hits both of those sensitive areas.

Wolves are native to Michigan, and they were once found throughout the state. But aggressive predator control programs in the 19th and 20th centuries, including a state-paid bounty, caused them to nearly die out. To stave off extirpation, or their total loss in Michigan, wolves were placed under full state protections, and they also were listed under the federal Endangered Species Act in 1973.

State and federal managers undertook meaningful recovery programs in the 1990s, helping to ensure the population held steady at over 100. Since then, both wolf numbers and public support for increasing the number of wolves have made considerable progress. Surveys completed in the 1990s indicated that roughly 60% of Michiganders supported wolf recovery. Although they used a less distinct metric, reports on public meetings held in 2013 indicated that a large majority “care a great deal” about wolves.

Like many contemporary issues, the debate over wolf management policies has been largely partisan. Senate Resolution 15, passed on March 9, urges the Michigan Department of Natural Resources to organize a hunting and trapping season for wolves. It passed along party lines, with all Republicans voting for and all Democrats voting against. The DNR, to its credit, has stayed neutral in the debate, refusing to comment on the legislative resolution.

In hopes of getting better data that it can use in its work, the DNR is organizing a survey of public attitudes towards wolves, the first in eight years. The statewide survey conducted in 2013 identified, and managed public perceptions of, 12 categories of concern. Three of the top concerns were wolf conflicts, having a sustainable population, and wolf interactions with deer.

Human-wolf interactions are unbelievably rare. In fact, no wolf-on-human attack has ever been documented in the state. “A Case of Wolf-Human Encounters in Alaska and Canada,” by Mark McNay, documents 80 wolf-human interactions over the last 60 years. In most of those cases, wolves were interested in humans but were not aggressive. While wolves are large, potentially dangerous predators, it’s worth remembering that you are more likely to be killed by a dog, bee sting, lightning strike, or by hitting a deer with your car than by a wolf.

Human encounters with wolves are rare, and wolf predation on livestock or domestic animals — killing for food — is slightly more common. Any lost livestock represent a significant economic cost to a farmer or rancher, but there are systems in place to mitigate a cost such as this. State tax dollars are used to compensate ranchers by paying market value for any cattle lost to predation.

As shown in the figure below, Michigan’s wolf population steadily increased from the late 1980s to around 2010, and then leveled off. This leveling is most likely a result of wolves reaching the maximum population their food, resources and habitat can support, absent any specific human intervention. Biologists and ecologists refer to this concept as carrying capacity. We can expect a relatively stable wolf population of 600 to 700 in the future. 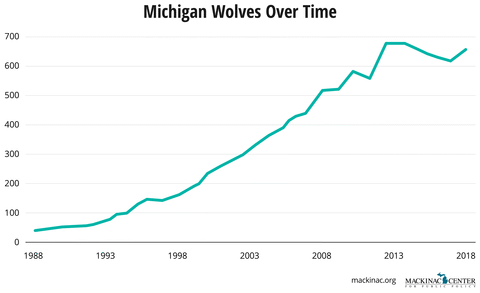 The public survey revealed widespread concern about deer predation. There are around 550,000 deer hunters in the state of Michigan, and hunting and fishing generates an estimated $11.2 billion a year in economic activity. Given this, wildlife managers cannot afford to ignore the potential impacts that wolves might have on deer hunting in Michigan. Using data from the DNR annual wildlife surveys, we considered hunting participation and the success rates associated with the harvest of different animals throughout the year. According to our calculations, while wolf populations have approached and stayed at capacity levels, deer hunting success rates have been constant over time and elk success rates have moderately increased. This suggests that a healthy wolf population has little to no impact on whether hunters are successful. 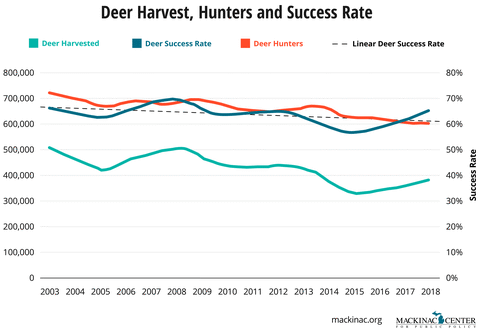 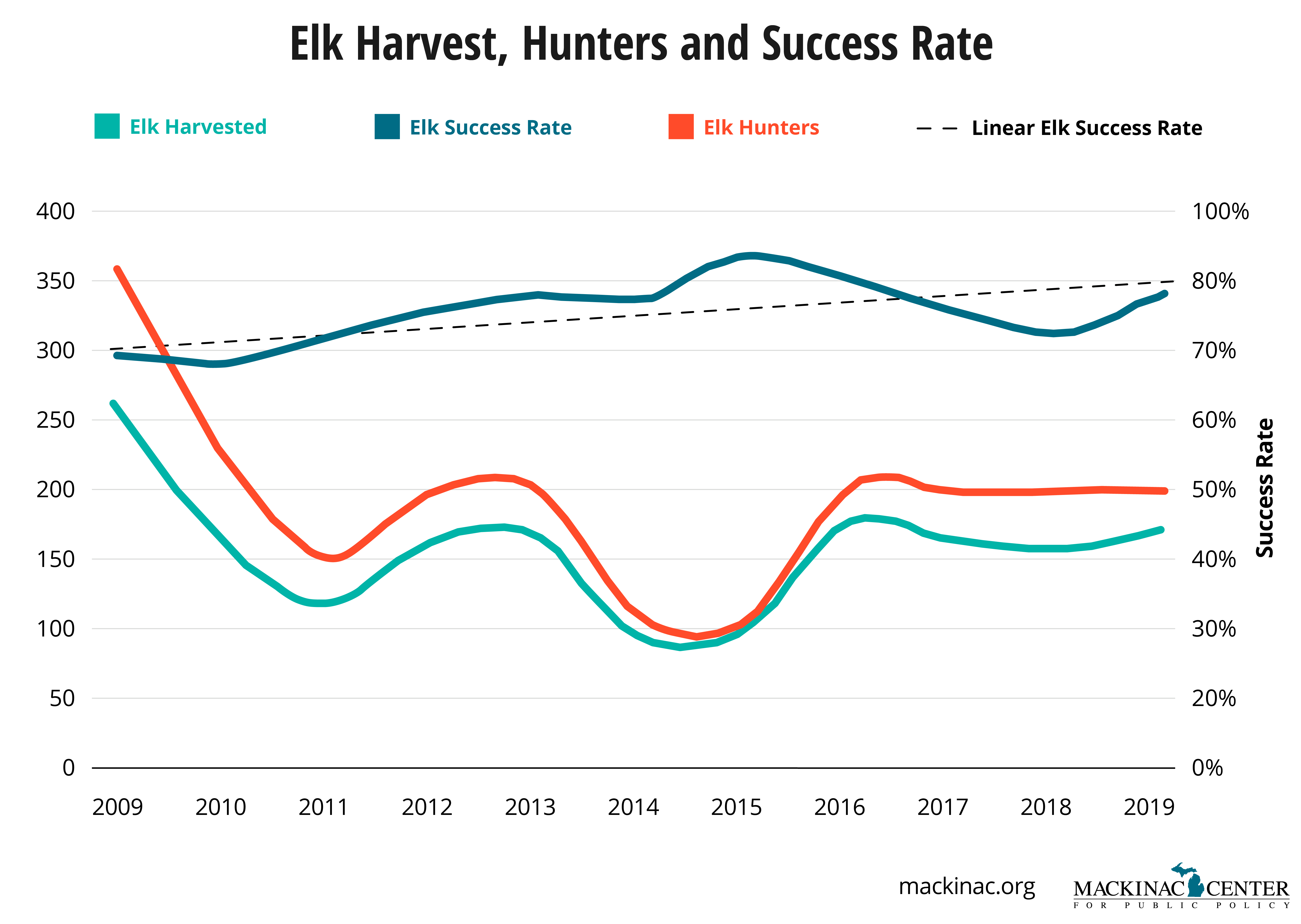 We should also consider less obvious benefits that come from having more wolves. One is the helpful role that wolves can play in managing and mitigating the spread and impact of chronic wasting disease in deer and elk. United States Geological Survey research suggests that wolves may be able to delay and slow the spread of this disease.

Finally, while a recent wolf hunt in Wisconsin was criticized for allowing hunters to take too many wolves, Michigan’s own experience also seems to support a managed wolf hunt. The last hunt in 2013, cautiously hailed as a success by the DNR, was careful planning paired with a call-in reporting system to keep the hunt within a specified limit. Additionally, a reinstated wolf hunt could generate significant revenues for both government managers and local businesses from licensing, lodging, travel expenses and equipment. Those revenue numbers would likely be bolstered by out-of-state hunters and would help to improve funding for conservation efforts.

Wolves have quantifiable ecological and societal benefits. They are not causing widespread significant harm to livestock, humans, or other domestic animals. There’s little evidence to suggest their population will grow out of control, given years of steady numbers near the carrying capacity. With a healthy and stable population of wolves, a well-organized hunt focused in counties with verifiable high predation rates on livestock will bring tangible benefits to the state. These will include reducing negative wolf-human interactions while increasing revenue to directly support continued wolf conservation.

Editor’s note: We are adding the following to the story in response to a reader’s email, which said that the author did not consider the dangers that wolves pose to moose.

In addition to looking at deer and elk trends in Michigan, we considered moose populations in the state and any effect wolves may have had. The Michigan moose population is almost entirely in the western Upper Peninsula. The Department of Natural Resources estimates the moose population every two years. 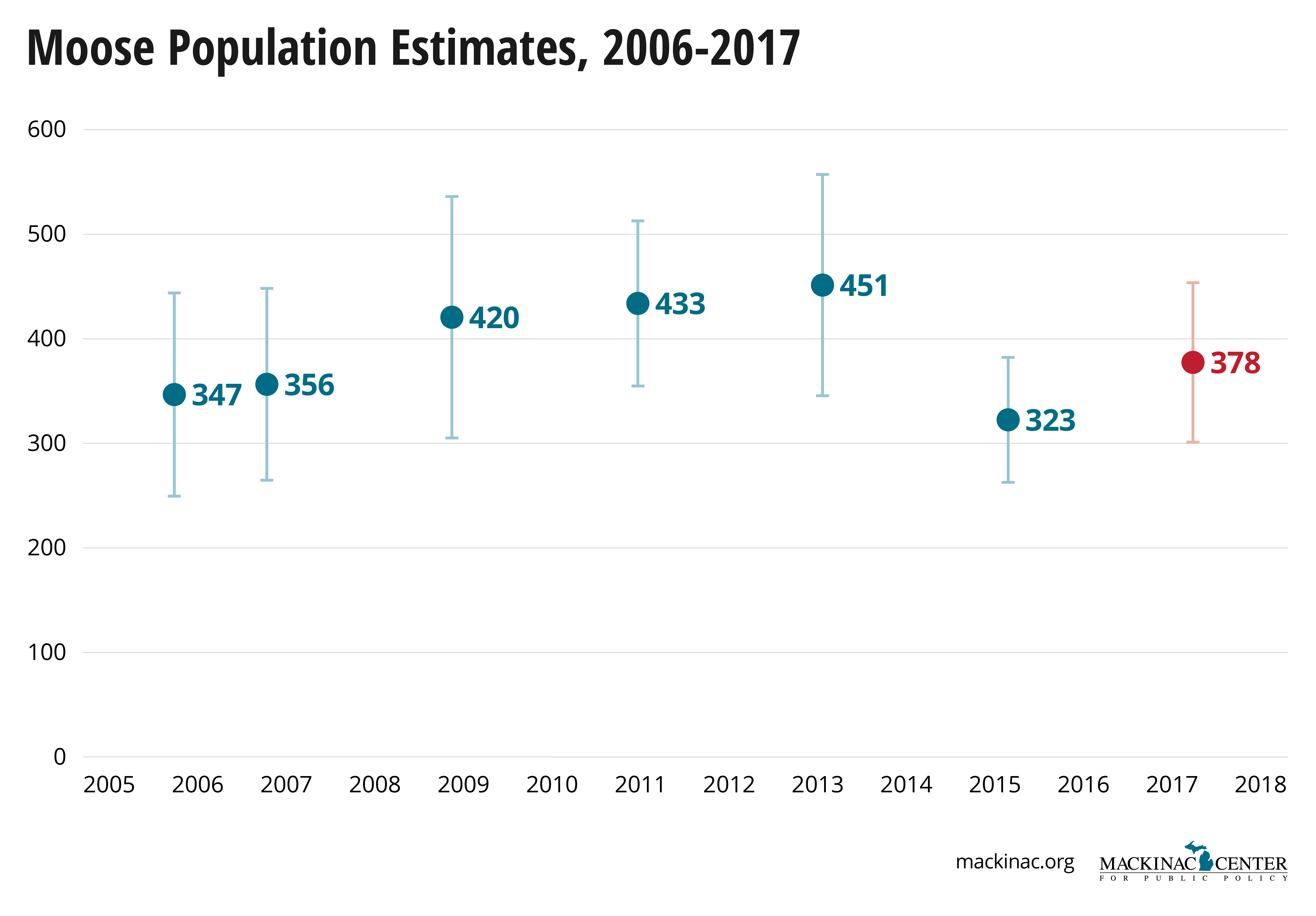 The moose population has grown at a rate of approximately a 2% each year since 2006. The DNR has stated that it will only consider implementing a moose hunt if this rate of increase rises and stays above 3% annually.

According to the DNR’s estimates, the moose population shows no significant decrease during the same time period in which the number of wolves was either increasing or at capacity levels. The link embedded in the graph includes the full DNR report.